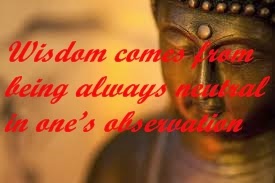 Take positive thinking, NATO positively thought it could win certain wars but are wars either destructive or constructive? They are both which depends on a lot of factors like who loses or wins a war or who materially benefits from such wars but it is obvious wars are mostly destructive.  You can’t only label positivity with constructiveness; it is obvious positive thinking can be extremely destructive.  Now what if we only used neutral thinking, would wars exist or could wars exist?

Wars just wouldn’t exist; we wouldn’t contemplate wars, not just because we don’t think negatively or positively but because wars would be seen as being destructive.  Hang on here, how would a person who neutrally thinks judge war as being destructive or not, once you have judged you are not neutral in thought?   A neutral mind isn’t dead or stagnate in thought, it observes what isn’t or is destructive, it’s not judging destructiveness as being negative or bad it’s just an obvious observation of how destructive a war or anything of this nature can be.  You could say a neutral mind is a wise mind, it’s wised up to how even constructiveness can be destructive for example, constructing a house in the bush/forest, what are we destroying while we are being constructive?  This is why a neutral thinking is more natural, it’s aware of nature which we are also a part of.

I would say deciding not to conduct ourselves in wars would be of wisdom, taking on neutral thinking would be the wisest thing we could do because it’s obvious it would mean no more wars  or conducting ourselves in any other kind of destructiveness.

Neutral thinking does however take us to make certain sacrifices like ridding ourselves of judgment which means we no longer judge ourselves as being positive and others of being negative.  It will take us to rid ourselves of the controlling factors of the ego. This might seem difficult, maybe too difficult but it’s not really, all it will take is to not judge a right or wrong, good or bad, positive or negative period.  It’s really easier than you think, all what you need to do is not judge how difficult it would be to do this in the first place.

It is also advisable not to judge judgement as being bad or negative in some way, ask yourself, is judgment bad or negative while your mind is not in judgment?   If you are truly not in judgement it is neither one thing nor another, it’s just another way to think and exist and it can either be destructive or constructive when only observed and not judged.   In all however we really do need to rid ourselves of judgment and learn to only observe through neutral thinking if we want to become more constructive instead of destructive.   I should also state that neutral thinking connects us more to the inner self for the main reason the inner self isn’t of judgment but of observation.
Posted by Mathew Naismith at 22:11