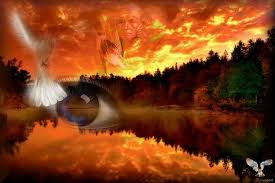 I am not seeking truth, all I am simply doing is seeking honesty, especially self-honesty in others and myself. Truth is limited to what we are aware of, honesty has no such limitations, unless we impose limitations on honesty through our ideologies and isms. The following post is simply about my own self-honesty, as I suppose all my posts have been about to date.

Supernatural: Once you become truly at one with God, what then makes a God? So once you are truly of supernatural powers, what then defines supernatural, what higher power is then not natural to you? So supernatural comes down to this, if it is not natural to you at this point, even of the point of human existence as a whole, it is classed as being supernatural!! Don't' get me wrong, it is quite understandable to someone like me that we perceive what is and isn't supernatural, I however don't myself agree with this perception as it is merely a perception created by our own antiquated state of mind, a mind that still holds onto the mentality of throwing rocks (missiles) and stones (bombs) at each other.

It is highly understandable that a mentality that basically still throws rocks and stones at each other after thousands of years of existence, will indeed still see itself as being inferior to some higher order. And why not, considering that our mentality hasn't evolved that much over thousands of years? When you consider a species that hasn't evolved that much but have created so much, what would have a species created that did mentally evolve? To a species as our own, probably something supernatural, mainly because we are not conditioned to this kind of conscious existence and understanding.

I need to at the point define what supernatural is.

Supernatural: Not existing in nature or subject to explanation according to natural laws; not physical or material

Nature: The essential qualities or characteristics by which something is recognized.
"it is the nature of fire to burn"; "the true nature of jealousy"

Natural law (Latin: ius naturale, lex naturalis) is a philosophy asserting that certain rights are inherent by virtue of human nature, endowed by nature—traditionally by God or a transcendent source—and that these can be understood universally through human reason. As determined by nature, the law of nature is implied to be objective and universal;[1] it exists independently of human understanding, and of the positive law of a given state, political order, legislature or society at large.

So supernatural is something that doesn't exist in nature or is not physical or material. So God creating this universe was of the supernatural, even though scientists today are aware in how to create a universe, even at the stage of awareness we are at!!

I don't look at God or any other consciousness that might have created this universe as being supernatural. To me, it is highly natural for a far more aware and wiser consciousness than our own to create a universe, even if we are unable to perceive such a consciousness at present existing. You must understand, for example, just because penicillin didn't exist before it was discovered, didn't mean it wasn't going to be discovered, or, wasn't already discovered in some other part of the universe. Just because we are presently unaware of something, doesn't mean it doesn't exist, of course it doesn't mean it does either!!

So supernatural is about a higher force than our own, even of reasoning, that doesn't exist in nature, even though we are of nature and we perceive that supernatural forces exist!! So if a consciousness did create this universe that we are unable to see or is non-psychical to our present understanding, this force is not of nature? To someone like me it is more of nature, for it is natural for a far more aware and wiser consciousness to create, especially a universe. Keep in mind, natural means, "In accordance with nature; relating to or concerning nature." What we perceive to be of physical reality, a far more aware and wiser consciousness might perceive differently to what human consciousness perceives. This is the same with what is and isn't of nature and what is and isn't supernatural......

Posted by Mathew Naismith at 08:54 No comments: