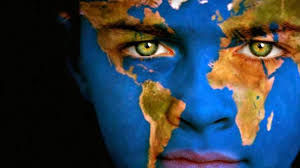 Look at it like a jar of water where there are different particles to the water but the water is still observed as being water. I often observe this universe like a jar of water, in actuality I look the whole existence like this with no separation. Now perceive that each particle within the jar of water represents good and bad, negative and positive, wrong and right, black and white. No matter how much we try to separate and divide ourselves from our present reality, we are still like the jar of water. This is why a lot of new age ideologies are not for people like me, they are all about separation and division through perceptions of, for example, negatives and positives. In other word they are of the present reality of separation and division.

I still use words like negative and positive, good and bad, wrong and right to some degree. How I use them is not to separate and divide one from the other but to observe, like the jar of water, different parts of the whole. Honestly, if you could observe energy outside 3rd dimensional aspects, you would observe there is no separation and division of energy, no matter how each energy form or motion of energy behaves.

We presently observe that there is a distance, therefore separation, between ourselves and another form, like one person to another or even a person in relation to a rock. What if I said, like the jar of water, that there is an energy between one form and another. It's like how we perceive, therefore observe, how our planet is separate through its individuality and distance from other planets within the solar system and the universe as a whole. The universe is absolutely full of energy with no actual space between one form and another. How much space is there in a full jar of water? Yes, you have air particles and other particles but it's still all connected by other forms of energy that make up water.

How many people say we have to go in to change the world or to influence ourselves to be of a different vibration? I've said this myself on numerous occasions however you don't actually go in. The reason for this is there is no in and out, up and down, left and right, back and forth, accept in a perception of a 3rd dimensional reality. Of course only being able to primarily observe through 3rd dimensional aspects and perceptions, going in is beneficial in relation to being able to observe other dimensional aspects of energy as a whole. We have simply created a reality where we have to go in to be able to observe other dimensional aspects of ourselves and everything else. There is no in and out in a state where you primarily observe energy in its purest state. To perceive an in and out is a separation and division of energy. Try to remember this while using words like negative and positive, in and out, to describe something.

I should remind you that I am not religious, I was brought up in an atheistic environment, I simply don't have any fear or bias of or against religion or the perception of God. I haven't been an atheist for some years now for a very good reason. I don't blame religion for all of the world wars and crises. Most of the people in the world are religious, so if most of the people in the world were atheist, we wouldn't be were we are at now? As psychology has proven, its human nature to be as we are, no matter what ideology or ism we follow. I would say we would be worse off if most of us were atheists. As studies have proven, in relation to morals, atheists would trust a religious person before they would trust another atheist. Could you imagine being in a reality were no one trusts anyone morally?

Getting back to the main discussion. Imagine the jar being the hand of God and everything else being the water like in the jar accept in this case it's simply the spirit within all things. I like the perception of God simply because the perception of God gives me a comprehension of oneness; of course you can use other means to do this as well in accordance with your own ideology or ism.

Of course with the jar of water there is a perception of up and down, in and out and so forth. What I am trying to portray using the analogy of a jar of water, is that everything is of one energy source. It's like going in to change yourself to change the world; you have to use 3rd dimensional examples so that the 3rd dimensional mind can comprehend beyond 3rd dimensional aspects of itself.

The jar of water simply exemplifies togetherness, no matter how much we desire to separate ourselves from this jar of water.

Posted by Mathew Naismith at 09:00 No comments: