Definitions:
Optimism; Hopefulness and confidence about the future or the success of something

Pessimism; A general disposition to look on the dark side and to expect the worst in all things

Optimum; The best, most favourable or desirable, especially under some restriction

Optimism creates rationality, a sound sense of reasoning, by confidently making reverence to its whole environment in the hope to understand it's own positioning within its existence. This is done without discounting any part of the environment for what ever reason, being it either a positive or negative perception of its environment.

Optimism takes in consideration of both negative and positive reflections, most always looking at the negatives in a favourable way or in reference to other perceived negatives. Reverence isn't made in comparison but in conjunction with. A good example of this is judging human consciousness highly negative and even toxic while excluding making reference to the rest of the environment like the sun.

The point is that optimism doesn't perceive that negatives are simply bad while at the same time making exclusions to these perceived negatives. Optimism optimistically, favourably, looks at everything with the same light, in the same value, void of separation. Perceiving that everything not of my own vibrations, my own reality, is negative or that certain forms of human consciousness are plainly negative and even toxic, is a sign of pessimism, not optimism. Pessimism irrationally looks at certain forms of human consciousness as being negative therefore bad void of making reference to the rest of the environment.

So why isn't optimism of a positive state of mind?

A mind set to negative or positive thinking creates a state of pessimism, all else not of its own vibrations is excluded. This sounds awfully too familiar today. To a negative mind, the positive mind is highly negative and visa-versa, this is not the same with a balanced mind because a balanced mind creates a state of optimism. Everything is seen in a favourable way through the acceptance of the whole environment the way it is, not just accepting parts of the environment we desire to be of.

Pessimism is of both negative and positives perceptions; pessimism needs an opposing opposite to exist thus we have perceptions and creation of negatives and positives. All of a sudden numerous people are judged as being toxic, excessively negative, how optimistic is this especially in regards to what is being so critically judged and ostracised, not included? To even look at yourself as being of some kind of higher value than judged negatives is quite a dark way to exist.

Is it positive and optimistic to refute an obvious occurrence because it's negative? Optimism looks at the negative occurrence and tries to make the best of it, pessimism simply ignores the obvious. You can see how a true state of optimism creates a state of rationality and pessimism creates a state of irrationality. One takes in consideration of the whole picture while the other only takes in what it desires to be of, the small picture.

I really hope I have explained this better, an optimistic view........

Posted by Mathew Naismith at 09:33 No comments:

The Question of Optimism and Pessimism 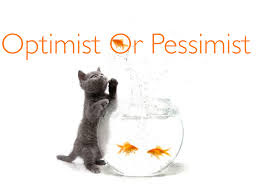 I was going to post this post as is below; I had an urge the next day to explain myself better.

People like me try to express balance and moderation to other people within all motions, even of the motions that makes us feel good as all motions create a counter-reaction; this is cause and effect, action reaction. It is obvious that any consciousness of an extreme is going to judge people like me negative, of course all this shows is that balance and moderation is needed in their lives. Not everything not of our own vibrations or environment is negative. I find it strange that balance, moderation and the truth in how it actually is has become simply negative these days to a lot of people.

I completely understand why positive thinking is the new popular way of thinking, it either gets us away from what we have critically judged as negative and/or it allows us to excel or gain some kind of wealth. It can be any kind of wealth that feeds the ego, for example, anything that makes us feel good in a negative world. If it feels good it has to be good is the egos motto, the more the better of course.

Extract: First, "you're being an optimist" should not be an insult. What we should be saying is "you're an irrational optimist!" We are trying to say that person has a warped vision of reality, which is based on desire, not how things actually are.

In regards to my last post, A State of Mind and Being, I was labelled negative because of my negative vibrations. If at any time I was as negative as positive people try to label me to be, I simply wouldn't be still around or I would have simply crashed and burnt psychologically, become too mentally unstable to express rational optimism. I am not the one judging everything not of my own environment negative, these so-called self-proclaimed positive people are!!

There are more perceived negatives out there today than ever, only because we have created them. Oneness is all about being more accepting not less Christine. We have become far less accepting than ever which infers separation not oneness.

Reply
Please, go away, this is becoming Very Creepy.
And quite frankly your "negative" vibes are starting to grind. Have a good day.

My Reply
WOW, this is my post and I am the one who is supposed to go away because of my negativity. This is the mentality that positive thinking creates Christine, when did the truth become negative?

Christine, it is obvious you are into positive thinking which I have shown in my post leads to irrational optimism, you have clearly shown this here. You can release yourself from this state of mind Christine but you have got to want to do this. If you desire to continually critically label everything else not of your own vibrations as negative or even toxic, so be it.

I sincerely hope the best for people like you Christine. Be well and blessed.

Posted by Mathew Naismith at 07:42 No comments: