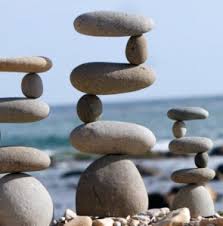 I was recently invited to join a group of people, predominantly of Indian origin, on a social media network site who, to me, show a good deal of balance between the eastern and western mind. There caring loving gestures in interaction to each other seemed quite different to when the predominant western mind in people try to interact in the same way. I have interacted on a number of forums where the western minded people don't quite seem as genuine within their caring loving interactions. The difference for this I found quite interesting.

How many western minded spiritual people put the spiritual world above all other worlds? To the eastern mind, spiritual values are of no lesser value than material values and visa-versa, make no mistake though, a lot of easterners are becoming more western in mind than eastern thus an imbalance is created. As I have spoken to a number of people from India, the concern of their own people becoming more of the western mind is concerning, in that knowing how the western mind puts itself above nature and all else not of itself.

You might then look at the Hindus for example, in how they have so many spiritual festivals. To the western mind, and understandably so, the Hindus seem to be prominently of the spiritual world, there is no balance between the material world and the spiritual world!! The many God's and Goddesses are simply a representation of the many facets of life as a whole. Many deities represent man's own character and psychology. In actuality, Hindu deities represent the material world as well as the spiritual world. You will find this in most eastern spiritual teachings, only if you are not predominantly of the western mind that is.

If you are also of the eastern mind, you will find the following quite interesting. It is in relation to a book titled, "East and West: Understanding the Rise of ."

Posted by Mathew Naismith at 10:20 No comments: