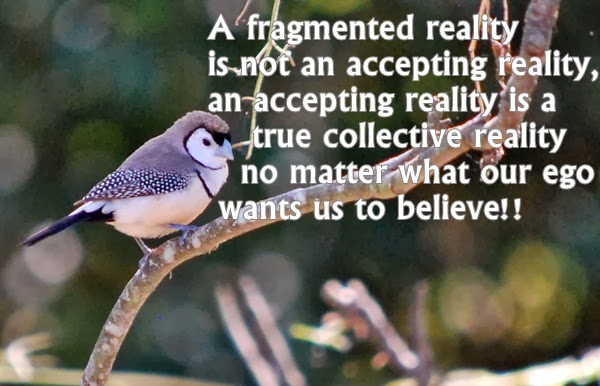 I was nagged repeatedly in a number of dreams last night to write about the fragmentations of spirituality, I never thought, until last night, that spirituality has been one of the most fragmenting ideologies man has taken on. I should mention here, writing about this topic never entered my head until my drams last night so it wasn’t on my mind before going to sleep.  I do think however spirituality can be very collective if we used it properly.

While in conversation with non-spiritually aware people, many hypocritical points of spiritual ideology come forth like the ego is bad in some way but one mustn’t judge or thou shalt not kill but an eye for an eye is OK. For starters if we looked at how many religions are out there you can get a good idea how fragmented spirituality is & new age spirituality is no different. Some concepts denounce the ego all together & others accept the ego to one extent or another, spirituality seems to be fragmented in one way or another.  The way spirituality is so fragmentising & hypocritical it’s no wonder non-spiritually aware people don’t want to take it on & this is before we consider blind faith & fear based ideological concepts.

One can take on certain spiritual practices like meditation or visualisation instead of taking on an actual spiritual ideology which seems to be what is happening at present however as soon as we take on denouncing the ego in some way we are assisting in the fragmentation of mankind. It seems so logical to denounce anything that seems unbecoming in some way to us but in doing this we are doing quite the opposite of what spirituality is also about, acceptance. If one is unaccepting in any way we are fragmented.

As explained in past posts, I don’t believe we do live in an illusion, the reason we want to believe this is to escape our present reality for some reason. The illusion is, we are not aware of our whole being, that’s all. What is so collective & of oneness when we denounce anything that is unbecoming to us as being an illusion, we seem to pick & choose whatever we want to call an illusion. Is it not more egotistical to desire to be of higher stature than in a lowly stature?  Calling what we are at present an illusion is egotistical to me because we want to believe so badly we are something grandiose. This is something else that irks non-spiritually aware people. Putting oneself above others less aware does seem to be a common occurrence in spirituality these days which obviously denotes egotism.

To me nothing in existence can be without it being a part of consciousness itself even so called illusions & all the nasty unbecoming things, yes we are higher beings but we are also lower beings. But again we want to egotistically think we are not also of a lower stature so we call realties like this one an illusion, makes perfect logical sense to me!! What is logical in saying we are of higher & lower stature in our true state of consciousness?  Man’s logic doesn’t come into it because man’s logic is flawed by his lack of conscious awareness, yes it seems more logic to think we are one or the other because that is what we desire but it’s actually both & all the above at the same time. Consciousness itself doesn’t judge one stature being above another; it’s just different to another when in existence in time. Yes we want to humanly & logically believe we are just this higher being but what has consciousness itself deemed to be higher or lower when there is no judgment? We are consciousness itself in all forms of being which to me is far more acceptable than being just this grandiose higher self.

The acceptance of being all of what consciousness is, not just parts of it that we desire to just be, is more to do with collectiveness. The desire to be just of this grandiose stature is to me so fragmenting & egotistical, it’s not collective at all even though logically it seems that way.
Posted by Mathew Naismith at 08:56 No comments: 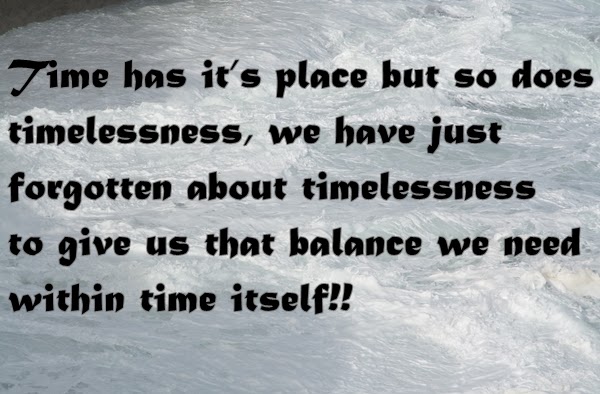 What we perceive we generally believe, all ideologies, including religious & science orientated ideologies, are a perception of one kind or another that usually block us from being aware of other perceived ideologies, the question is which one is right over all else? In timelessness there is no right or wrong but in time there is because in time everything seems fragmented & disconnected, time gives us fragmentation of consciousness, this also includes the way we all perceive.

Religion has tried to get us all perceiving in the same way which is less fragmented but by doing so has taken free thinking away, in other words we no longer think for ourselves to one extent or another, the ideology is thinking for us. We could ask here is free thinking fragmented consciousness & is religion of defragging of this consciousness to better connect us to consciousness itself (God)? Well it should be but we have so many religions perceiving in their own way which denotes fragmentation plus the controlling factors of the ego seem to always distort any real reconnection. Science & most other ideologies work in the same way, once we start defragging the fragmentation of consciousness we tend to end up with a controlling ego. When we incorporate the controlling factors of the ego we are once again end up with a consciousness that is fragmented.

The controlling factors of the ego seem to only exist in time, once we take the controlling ego out of the equation it would seem it would be very possible to reconnect consciousness back into it’s natural state of connectedness (oneness). I should enumerate here that we are not talking about the ego self but the controlling factor of the ego, there is a huge difference. Time is going to always produce fragmentation like the seemingly fragmentations of all our lives lived; I don’t look at it as many lives lived but one life lived under different perceived existences. This is done by thinking out of time (timelessness) to an extent which gives me very little fragmentations of my whole existence, the only fragmentation there is, is in the perception of different lives lived which can’t be avoided while remotely thinking & being in time.  Yes one can totally be with timelessness & be totally connected with consciousness itself but one would no longer be in time. One should ask oneself here, is it more egotistical to desire to exist in a connected consciousness of timelessness than continue living in a fragmented consciousness of time? What would a controlling ego choose?

The controlling factors of the ego is telling me that I have lived many lives but my ego self is telling me I lived one whole life seemingly separated by various perceived existences. The controlling ego is only of time but the ego self doesn’t have to be of time, it can’t totally exist in timelessness but it can be within the balance of time & timelessness & this is where all the beauty & oneness that we experience come from I believe. The pure essence of experiencing timelessness can be sequential to experiencing quietness within oneself as long as we can quell the controlling factors of the ego.
Posted by Mathew Naismith at 10:40 No comments: