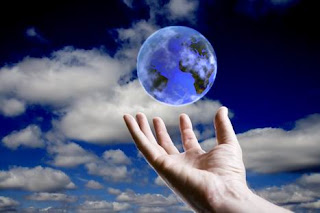 The point is, you can't expect a none physical conscious expression to be highly influential over and above conscious expressions expressed in solid form, especially within a 3rd dimension. We can sit here praying, chanting and mentally manifesting a better existence all we like, it's just not going to happen until such expressions are expressed in a physical way. Yes, in other non-physical dimensions and realities not predominately influenced by a 3rd dimensional mentality, this will work but it won't and never has worked to any degree within a dimension predominantly influenced by a 3rd dimensional mentality.

Let's put it this way, you have one hundred people trying to manifest a better existence through visualisation and on the other hand you have another thousand people trying to keep their manifestation alive in a much more physical way, which one is going to win out here? In actuality, which one has always won out, which one always comes out on top? You know why, because it's expressed in accordance with the 3rd dimension. You can't go into another dimension and express a form of consciousness at will, it just won't work unless you do it in accordance with the dimension you are in.

Now you would think mentally visualising and expressing these constructive visualisations would work, this is in accordance with the 3rd dimension because you are now being physically expressive.

However, because we are also a part of this reality, we can in our own right be influential towards a more constructive reality, this is our right but don't expect miracles. Yes, one hundred people can and do make a difference but a thousand other people who desire the opposite make a much bigger impact!!

It's just the sign of the times, have we truly got the right to change the majority of people's (collective) manifestations? This is an interesting question, let's look at it this way, do religious people have a right to force their own conscious expressions onto everybody else?  Even today they obviously think they still do, do we really want to go down this path? To the aware, there is a need to change our destructive ways but to the unaware there isn't, which manifestation has more of a right over another within a 3rd dimension?  An aware consciousness will state no manifestation is over and above another manifestation, however, an unaware consciousness will always state my manifestation is over and above other manifestations. Can you see what we need to get away from if we really want to make a difference?

What we really need to do is give people a choice, that is all we need to do in my mind otherwise we will only add to the chaos even more. Christianity, Buddhism, Islam, atheism, agnosticism, new age spirituality, are choices until they become predominant above all other manifestations.

It is wise to be influential, it is unwise to be predominantly influential for there is no wisdom in one's own influence.....Mathew!!
Posted by Mathew Naismith at 10:00 No comments: 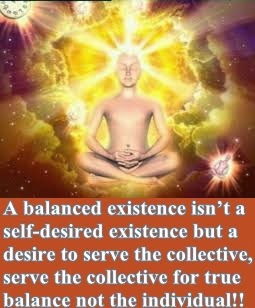 This post is going to seem utterly ridiculous to a lot of people because I’m going to say we already live within a balanced existence but because of our own personal desires and aspirations we can’t see this.

Again it has come up about self-manifesting for one’s own individual desire recently and how we can manipulate consciousness to fulfil our own personal desires.  We must think here, how many different desires would be manifested and how many of these manifested desires from different people would clash with other people’s manifested desires?

Another point is if all of us wanted to become wealthy, who is going to collect the rubbish or treat our sewerage? How about if we all manifested ourselves being fit and able, how many health workers jobs and security will this effect?  Let’s say a person desires to be a health worker but to be a health worker other people need to be sick in some way but on the other hand everyone desires to be totally fit and able. Can you see the clash between manifested desires? You could say a sick person is selflessly helping a health worker to manifest their own desire and the health worker in turn is helping the sick become well again, helping the sick person in their desire to become well again.

Individual manifestations collectively make a collective so what is wrong in manipulating this consciousness even more for our own personal desires as opposed to the collective desire?

At the moment we can manifest what we desire or don’t desire, to a point, but under this new collective manifestation we want be able to choose our own individual desires as we will. We will also have a garbage and sewage problem.

What we have now is a balance between one desire to another, a wealthier person relying on a not so wealthy person to keep our existence sanitary.  What about wars, what is so balanced about wars? War is an indication of an imbalance of egos, this goes with all conflicts. War/conflicts are a clash of different manifested opposing desires which bring a lot of unbalance to the collective. Our own furthering awareness will one day negate conflicts all together without us forcefully manifesting such desires.

The point is, we all have our own personal desired manifestation which gives us our present collective manifestation which isn’t all good but isn’t all bad either, it’s balanced.  If we interfere with this balance to the extent everyone can individually desire what they want, that balance will be gone and quite a different chaotic world will arise I believe.

Of course our egos want us all to be healthy and well even though other people will suffer for such wanted desires. A garbage collector and a sewerage treatment worker have their place to serve the collective as does multinationals, to selflessly collectively manifest for  our own individual desires over and above the collective is highly egotistical remembering war/conflicts are a manifestation of the ego.  We must be wise in how we manipulate this consciousness!!  The best way is to go with the flow not against it no matter what our ego tries to tell us and we also need to always keep the collective in mind when manifesting for our own desires.

I’m quite at home and content when I sit within my own quietness which takes any control that the ego has over me away, I just don’t desire more over and above others especially on the backs of others.
Posted by Mathew Naismith at 10:02 4 comments: