Using Love in a Balanced Way 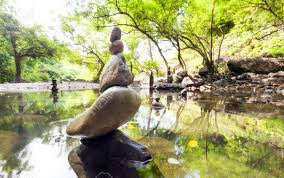 Consciousness is likened to a pool of water, one drop of rain causes a ripple that is soon enveloped within the stillness of the pond, however, numerous drops of rain cause the pond to become chaotic as each ripple, caused by the drops of rain, fight against each other. Because of such turbulence, the pond then becomes murky.

As we become spiritually aware, we feel we naturally become more of love and light, we then naturally feel human consciousness (the pond) couldn't get enough love and light, especially in relation (retaliation) to a chaotic reality. Psychologically all we have done is humanly responded to a chaotic situation in retaliation, this is a natural human psychological response in situations like this. I know there are spiritually aware people who don't think psychology belongs in spirituality but it does, used in the correct way, it quietens the mind. In actuality, any spiritual practice that quietens the mind, is a form of  psychology.

How is the pond (human consciousness) going to respond to too much water (love and light) at a given time, especially when the pond is not structured to take this amount of water in the first place? Human consciousness (the pond) is unable to sustain or comprehend this amount of water (love and light), too much of an imbalance will cause more chaos, not less. Too much chaos will also cause the pond to become structured in a different way, we might think this is what we want but what if the pond (human consciousness) just became another muddy back water due to it's restructuring!!

When leaders of the world today get up and clearly state they are going to kill as many women and children as possible (Palestinians), which is also being supported by western countries, is this a sign the pond is clearing. What about western leaders clearly stating they would kill Jesus if he lived today, these kind of thoughts and actions are no longer being stated behind closed doors. These actions are certainly not a sign that the water is even starting to become clear, in actuality, it's a sign human consciousness is becoming a muddy back water. The reason for this is clear to people like myself, too many ripples upon the pond is turning the water of the pond murky.

If we look at the pond (human consciousness), it is full of water (love and light), this is different to a pond full of mud (love and dark). It's very hard becoming aware in mud but a lot easier in a clear pond of water...Mathew G

We might think I should have stated hate and dark instead of love and dark, not at all, this is due to many people also passionately love to kill, love war and conflicts, love to hurt and cause pain with the same passion than any other kind of expression of love. We can deny this as much as we like but this denial won't help us make the pond water clear again, no kind of an unawareness or blatant ignorance will.

I must be a horrid person stating all this and yes, I have been  judged by many as something unbecoming in some way, especially in relation or comparison to themselves.

A couple of days ago I saw a lass (female) that I know get into her car with her dog outside of my house, I immediately got my life size toy dog and went outside to wave my friend off using the paw of my toy dog to do so. I am a fifty two year old bloke with no  inhibitions, this is quite obvious to all my friends. The other day one of my wife's friends asked my wife if I was drunk because I was acting without inhibitions. When I lived in a small town, a lot of the town folk thought I was taking some kind of drug as I was mostly always cheerful and happy. This is who I am even though my writings may be misconstrued, sometimes deliberately, to portray me as some kind of monster or demeaning entity of some kind. I do however have constant readers of my blog perceive me as the person with a toy dog.

Yes, maybe I feel to much for a consciousness struggling with itself trying to clear the water of the pond. I  can see a consciousness trying with all it's heart to clear up the pond water when all they are doing is adding to it's murkiness, this is obvious in the way some people are today expressing themselves in plain view. In all however, what the human collective consciousness chooses to do, it will do as this is it's path but we must be aware, there are other paths this human consciousness can still take, this is all I am portraying as always.

Posted by Mathew Naismith at 09:24 No comments: