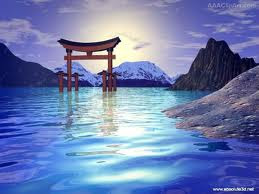 Primary Existence: It would seem strange to a lot of people that I made reference here to a primary existence in relation to, for example, a Christian God and a Buddhist principle of nothingness. It is most likely that people from each of these ideologies, would state there is nothing in common with a God and nothingness. To a Buddhist, the representation of a God is ego, nothingness is egoless, consequently, a Christian might state that God is nothingness, how in this case can the perception of God and nothingness relate to a primary existence but they do?

The relation to everything, as a perception of God or oneness for example, in a primary existence denotes an undivided existence, a whole or collective that is undivided. God represents everything therefore is undivided within itself. This is the same with nothingness, there is no division in nothingness. The Tao is exactly the same, there is no division, it's all and nothing, not all or nothing.

The division or difference between Christianity and Buddhism for example, is an obvious illusion brought on by perceiving through the ego self for only the ego itself will divide. Christianity makes reference to a God, an undivided existence, Buddhism makes reference to nothingness, again an undivided existence. What about nothingness not even being an existence!! Only an ego in control would argue what is and isn't determined to be an existence or not, so I'm not going down this path to try to find a division for obvious reasons, I will leave this to the secondary existence ego control mind to sort this out. Of course it never truly will because all it would be doing is chasing it own tail to judging what is and isn't real, an illusion.

Being that the secondary existences are ego based, but not  necessarily egotistical based, the secondary perception is focused on division, this of course stands to reason because ego and souls represent division. Basically, anything that is obvious within it's division, is ego based, this in turn creates an ego based perceptions of divisions, not wholeness or oneness unlike a primary existence. The primary existence mind focuses on wholeness and oneness of everything as well as nothing, there are no divisions between one or the other, actually, there is no one or the other, just wholeness, oneness.

Yes, everything and nothing are exactly the same thing, it's just in a secondary existence mind, there has to be division, one or the other...!!

Progressions: We might now think that there is a huge difference (division) between primary and secondary existences, they are obvious within their differences as I have clearly pointed out.

This is how we create in our own right while existing in a secondary existence, only in a secondary existence can creation begin, and yes, end. The strange thing in all this is, neither the secondary or primary is above or higher in stature than other, only an ego in control would be able to perceive this in this way, in other words, divide......!!
Posted by Mathew Naismith at 10:02 No comments: