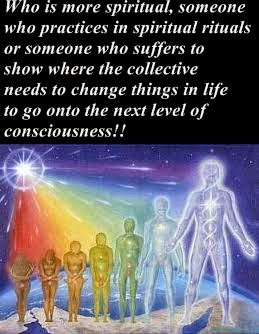 Here I was about to write up about how some people have the view that to be a lightworker/spiritually aware one must follow a certain criteria, in other words judged others to be or not to be lightworkers/spiritually aware people through certain spiritual beliefs and actions and then a post written by a Brenda Hoffman appeared.  I think a lot of people just might find this lass quite interesting as I did…but then again maybe not.  We of course all have our own path to follow but sometimes our paths do cross.

Extract: Some believe it’s not possible to be a Lightworker unless you meditate, eat certain foods or follow rules developed by other new earth entities. Such beliefs are right for those who created them – at least, at that time – but not for the you of the past, now or ever. Your true guide is within you. As you adjust to the new you, your skills will develop – just as is true for a new-born.

My Reply
I couldn't agree with this more Brenda, actually I was going to do a write up about how we judged who is or isn't a light worker/spiritually aware. If you sit and eat right and pray to the right deity you are a light worker, if not, you’re not a light worker, I don't think spirituality works this way!!

Also developing our new skills over and above our old skills has always been a must for new development, spiritually or scientifically. The old skills worked fine within a 3rd dimensional consciousness but we, as always, are developing further so our consciousness needs to change. Human consciousness has always evolved through accepting our new tools like stone tools to bronze tools and bronze tools to iron tools and so on.  We are having the same dilemmas as they did when motorised transport first came onto the scene, many people still preferred horse drawn carriages and had a hard time accepting mortised transport.

I think one of the tell tail signs of a light worker is acceptance……the acceptance of new consciousness’s without judging older consciousness’s so and so.  Sitting and eating right and praying to a particular deity is old conscious that a number of people are having a hard time letting go of. Within this new consciousness you realise that everything was of the spiritual and we all had a role to play to assist in accepting new consciousness’s right throughout human history.

Spirituality has become just as much about labels and titles as the sciences, for example,  someone participates in a workshop, after completing this workshop they are then titled a so and so and now they fit within a certain slot. This is obviously all about judgment, now I have my slot and title I’m obviously more of a lightworker/spiritually aware than others. For one we need to get away from this separation and judgment.

The following was my reply to how I and others see this reality as a play being played out by players of all kinds.  This shows how some people view what is or isn’t a lightworker/spiritually aware isn’t quite correct because these girls are still playing out their role as a lightworker even though they are not spiritually aware.

You just wonder at times why certain roles need to be played out!!

Recently I was reading about the problem over in China, how males will never find a partner of the opposite sex. This has led to a boom in the sex industry in China.

They coax, kidnap, buy girls as young as 11 yrs old to work in these industries, very few of them live to 20 yrs old. This of course just doesn't happen in China by far.

Will we learn from this, have we ever learnt from past deeds like this? We are still doing these things so we haven't learnt. Are these poor girls playing out their role to show us where we need to change to evolve further consciously?

People are still going to suffer if we haven't learnt from the past. These girls, and all who suffer, deserve our deepest appreciation in showing us we still have work to do before we go on to the next conscious level.
Posted by Mathew Naismith at 10:20 No comments: