A Reality of Chain Reactions 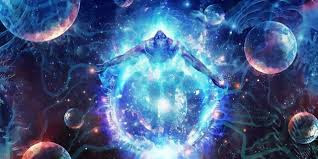 Chain Reaction: At first this seemed like a strange spiritual orientated topic for me to write about, what's chain reactions got to do with spiritual practices?  In actuality it has everything to do with the way we express ourselves as each expression causes some kind of reaction, as soon as we express ourselves, we cause a reaction. This however doesn't mean all our actions and reactions are going to cause a chain reaction, a continuation of an initial action or reaction.

Consciousness: Now the thing to consider here is the initial consciousness behind each chain reaction, at the moment, many people are talking about and expressing love on the net but how genuine is this love because if it's not genuine, it won't cause a significant chain reaction that will make a substantial long lasting difference. I've been on the bitter end of this love, it's sad as it's not as genuine as it seems at first, it's certainly not in the same league as Jesus or Buddha for example. In this case, it's not going to make much of a difference as these chain reactions only have a short cycle.

The hate in the world has created a huge long lasting chain reaction that has lasted thousands of years, why has it lasted so long?

A consciousness that is genuine, will create a chain reaction that will last and be predominantly influential over all other smaller less genuine chain reactions, the hate in the world has always been genuine, look at what we have done to each other in human history, this hate is genuine and so should be our love if we want it to become predominantly influential especially over hate.

One way to test if your love is genuine is put yourself into a situation that would usually make you feel anything but love towards others. If in this case you are unable to feel any sort of love towards these people, your love is most likely not genuine. Ostracising people is another indication of a non-genuine love, think on this, did Jesus or Buddha ostracise anyone?  I actually don't mind hanging around the people I refer to as unbecoming, they certainly test how genuine  my love is, did Buddha detest the egotistic self therefore ostracise and not face the egotistic self?  He confronted it face on, this is why people like this have caused a significant chain reaction, if we truly want to make a significant difference, we must do the same.

There are realities that are not influenced by chain reactions, yes, these realities are peacefully existing in utter bliss because within a reality not created from chain  reactions there is very little motion. For example, within these realities you don't have to express consciousness of love for love to exist, it's already exists, however, we are not presently existing in such a reality, our reality is purely based on chain reactions so for a significant change to take affect, this change needs to be expressed. The more genuine we are within our expressions, the more these changes will take affect.

Are there universes that weren't created through a chain reaction?

To me, these universes and realities are alive, they were created by a consciousness for starters, this means each reality and universe has it's own influential persona or character in a sense. Take atheists for example, no form of God's consciousness exists for them, their reality is governed by a certain facade or perspective that doesn't include any form of God, this in turn creates quite a different reality compared to a devout Christian for example.

Personas: Now it might seem lame or ridiculous to say that realities and universes have personas very simular to humans, where did our personas actually come from? Certainly not out of thin air. I am aware that in other existences, not of this universe or reality, conscious forms have a totally different personas than we do within this reality/universe. Let's just look at our own solar system, no planet or orbiting planetary form has the same exact characteristics as other planetary forms, they all have their own personal characteristics which is influenced by the universes creation itself.

I would also say that beings in other galaxies would have a different character to ourselves, this is due to each galaxy and solar system being also influenced by a certain kind of persona or character. This persona then becomes a part of all  living things being created within such a reality.

To a lot of people who don't perceive that realities and universes are a living conscious form, this is going to be hard to except that solar systems, galaxies and universes, have a kind of persona or character that every living conscious thing created under these influences also enact out, this is inevitable. If it's not seen as being alive in some way, how can it have a persona or a character of it's own!! However, once we perceive that everything is alive in some way, as it's all created by a consciousness anyway, it's easy to see that the universe has it's own persona and that each galaxy and solar system and even planet has it's own derivative character.

When you take other universes into consideration here, it's easy to see that each universe/reality has it's own persona or character and that conscious forms created within these realities also take on a form of this character in some way.

The reality we are  presently experiencing has been brought about by a chain reaction, this gives this reality/universe it's own persona/character which then influences all conscious forms created within this particular persona/character. Basically what I am saying is, our personas are derivatives of  the universes/realities persona which then creates our own unique realities and personas based on chain reactions.
Posted by Mathew Naismith at 20:52 No comments: