Spirituality and the New World Mentality 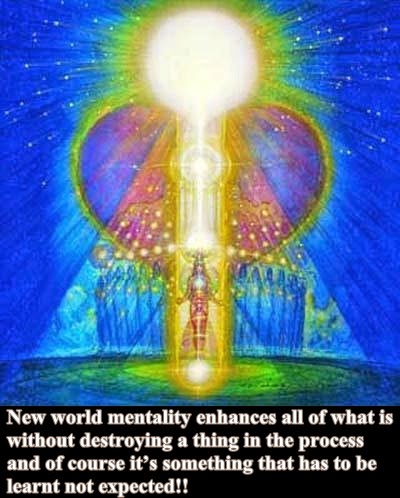 What’s the new world mentality in spirituality? To answer this we need to understand what the old mentality was and still is first.

When we think of dogmas, doctrines, various religious practices, karma, meditation, praying, chanting and so on we know this is in relation to spiritualism in some sense. A lot of these ideologies and practices stem right back in time to the dawn of man, well almost anyway.  So is this what I mean by old world mentality? Well not exactly but they are obviously of this old world mentality.

Recently I have been getting a bit of a rebuff from some of my posts which is fine and quite normal at times, it’s expected mainly because my posts usually bring up views that clash with other people’s views.  Recently I’ve been called a few names and accused of being this that and the other but what is this saying, not about me but the name callers? It’s obviously a reaction that’s meant to be destructive in some way but this is coming from spiritually aware people like myself……..well sort of!!

By the reactions I’m getting I’m some kind of threat but why when all I am doing is pointing out my views that’s all. None of my views come from an ism so what’s the problem?  Could it be old world mentality rejecting new world mentality?

If we go back to some of the deliberate destructive responses I have been getting lately I believe you can see, by becoming an observer, what I mean about old world mentality. What actually sticks out in these deliberate destructive responses?  Fear and ego comes to mind but what actually sticks out and says,” hay you can’t miss me”?  Destruction, this has obviously been man’s mentality all these centuries because that is exactly what he has done all this time, yes he’s constructed and created a lot but he has had to destroy a lot to accomplish this.