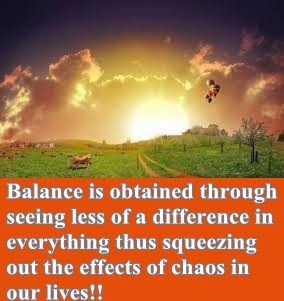 Balance is a tricky little beaver because it is usually defined by our own perception of what balance is, some people believe love will give us balance and others believe hate gives us balance.  Thinking that hate gives us balance is shown right throughout history, Hitler is a good example of this and so was the Roman Empire.  The reason hate or a dislike of another culture seemingly gives us balance is the peace proceeding such dominance, you rid the world of opposition you have peace.  This actually worked to one extent or another during Roman dominance, the short lived dominance of the US and supporting countries like Australia is but another good example of this.

Yes I know a lot of people in the west are going to say we no longer have slavey in western thinking countries but we do, to the system, we are just slightly different to the slaves of old.  This new slavery system hugely benefits the multinationals because they can gain so much more wealth through this newer system of slavery.

On the opposing side of this outdated mentality we have a spiritual renascence occurring especially in western thinking cultures and communities. Science is also coming of age delving into things it once thought of being hoogly-boogly (fanciful/delusional) but where does all this leave us?  Basically in chaos, as soon as you have extreme opposing sides you have chaos, love is but one example of this extreme which is in responds to an outdated and highly unaware and most often hatful mentality.

I explained in a recent post of mine, why I think this reality is balanced however I didn’t seem to explain enough to why I think it’s balanced. Just because you have extreme opposing sides doesn’t make a circumstance unbalanced, if Hitler took over the world we would still have balance but this would have been accomplished through extreme fanaticism. If you have no opposition you have balance and peace, Napoleon is another good example of this.  However Hitler and Napoleon still had opposition to subdue as did the Romans.

What I have been talking about here is extreme opposites however what if we bridged the gap between these so called opposites, would any clash between these lesser extremes be as chaotic?

Let’s use yin and yang for an example here of the difference between chaos and balance. You have a highly dominant yang overlording it over the yin, do you still have balance? Yes because you still have a yin a yang at play here as it takes a yin for the yang to respond and visa-versa. However because the yang is more dominant we have more chaos and a presumed imbalance. If we brought the differences between yin a yang closer together we would have less chaos and a more humanly presumed balance.

Balance isn’t defined in how peaceful, loving or dominated we are, it’s defined by opposing differences however the less extreme opposing these differences are to each other the less chaos we will experience.  It’s the extremes of our opposites that give us chaos and a seemingly unbalanced existence not a so called unbalanced existence/reality. You could live in an unbalanced reality and not experience as much chaos as we do now believe it or not as I believe chaos is defined by our extreme opposing opposites!!

This is why meditation works so well, we sit within our own quietness seeing little difference of anything.
Posted by Mathew Naismith at 08:58 No comments: