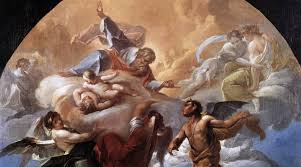 I am going to make reference to Abrahamic religious beliefs to some extent, so if you have any fear or disdain for religion, I suggest you don't read on. I am an open minded person, so expressions of disdain, fear and bias are going to less likely be present in my views and opinions. I am simply going to relate fallen angels to egoistic existences.

First of all I am not going to refer to angels as winged human beings but of a consciousness, soul or spirit, that are existing in an egomaniac reality while remaining virtuous or egoless. It is of the philosophical opinion that man, human beings, are egoistic by nature.Are not humans primarily or entirely of humans first and foremost? Look at the fallen angels, the egotistic people, which are trying to presently control the whole of the world's natural resources, thus creating a reality for and of egomaniacs. Is a reality of and created by egotistic people, soul or spirits, a depiction of hell? What is going to occur when the ozone layer is completely diminished? The Earth will indeed burn giving a depiction of what is called hell. Don't despair as not all is lost.

Yes, within an ego reality balance is the key, a balance of angels and fallen angles or of yin and yang, spiritualism and materialism, positive and negative and so on. I think to expect this kind of reality to be humanely peacefully perfect is unrealistic. Become aware of where you are at present and aware of whom you are. Are you what the present reality depicts? It is quite obvious that a lot of people, souls or spirits, are not of what the present reality depicts but at no time expect a depiction of hell to turn into heaven. Heaven being a place of peace, delight and bliss to an ego. It is peaceful, delightful and blissful to the ego when the ego starts letting go of the egos controlling ways.

My advice, especially at this stage of the game, is to stand firm to your virtues no matter what ideology or ism you follow.

Christianity shifted the origin of the fallen angels towards the beginning of history. Accordingly, fallen angels became identified with angels who were led by Satan in rebellion against God[6] and became equated with demons.[10]

Posted by Mathew Naismith at 09:31 No comments: