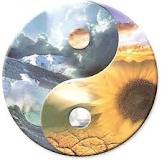 When we use logical reasoning to reason, we are limited to these contradictions,  we are unable to become aware past these perceptions of contradictions, spiritual awareness doesn’t work like this.

How can you be of motion and motionless at the same time and how can you be in oneness while experiencing a fragmented consciousness? To a mind that is unable to perceive past human perceptions, these are contradictions, this however stops these people from becoming aware of anything past these perceived contradictions.

It’s advisable not to listen to anyone who says that you are contradicting yourself, this is unless you are going to take this kind of statement as a compliment because it is a compliment. Anyone who doesn’t contradict themselves while becoming aware, are not truly becoming aware, this is like not making mistakes while learning, spiritual awareness works the same except it’s not a mistake to contradict yourself, it’s actually a  sign of one’s growing awareness.

Consciousness is so vast and infinite, at times it seems to contradict itself but it doesn’t, not when you become aware enough to know better.
Posted by Mathew Naismith at 08:19 No comments: