In Conversation With A Volcano 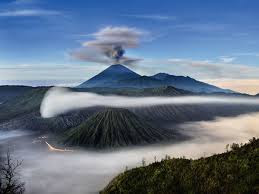 You're probably thinking, "What is Mathew on about now in relation to talking to a volcano,  he couldn't be talking about actually having an intelligent conversation with a volcano, is he for real? He has to be delusional". In actuality, I perceive it being  the other way around, we are, in our so called awaken state, deluding ourselves to what is and isn't real. I do find it interesting that one of the definitions of delusion is of the following, "The act of deluding; deception by creating illusory ideas." I am within this post going to portray that it's our perceived awaken state that is creating illusionary ideas.

First of all I will insert what prompted me to have this vision of talking to a volcano, the following was given to me to read from a very good friend of mine. I should warn you, the word God is used a number of times. The way I see this is that God isn't some biblical representation of this kind of consciousness, it's a consciousness that represents the purity and intelligence of our truer being. The word love is also used on a number of occasions. I think what love represents in this article, isn't the love that we perceive, it's a love that goes beyond the boundaries and limitations of 3rd dimensional perceptions, basically, a purer representation of love, ourselves.

Look at how man measures intelligence, it's primarily based on 3rd dimensional perspectives void of any influence beyond these aspects. This basically gives us false perception of what is truly what, any perception not primarily based on 3rd dimensional aspects, is usually deemed as being unintelligent and even delusional. The aspects have to be within up down, back and forth, right and left, in other words limited to certain aspects/perspectives.

Don't get the wrong idea here, there is no higher consciousness getting back at us, it's just that we are living within this higher consciousness thus naturally create and manifest what we express. We are indeed existing within a more aware, intelligent and wiser consciousness, it's just that we are asleep dreaming in 3rd dimensional aspects and perspectives. We are certainly not awake in our perceived awoken state and that our sleeping state is imaginary, there are too many limitations to our perceived awoken state to be real, it's indeed but a dream/imaginary.

If we communicated with this higher consciousness, and yes even reasoned with this consciousness, what we would create would be beyond our wildest imagination. Instead, we often manifest for material gain or a gain that is primarily based on 3rd dimensional aspects, the finite instead of the infinite. Try for one moment to imagine what we could create if we manifested using infinite consciousness instead of the usual finite consciousness. Imagine a reality void of deception that creates illusionary ideas and perceptions, magical comes to mind.