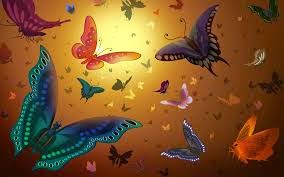 Just to show you how zany I am, I had a dream last night of water butterflies that actually live in water, these butterflies were very bright in colour and the atmosphere was very harmonious.  The water was much lighter in density as if it was air water instead of just the density of water as we know it. This is to shows you how zany I really am.

This seems quite zany, if we are forced to live a certain way, that means our mentality will also be in line with that way of living, this experience would have  to change our own signature would it not?

Awareness does this as well however the trick with this is not to live by someone else’s signature; any good spiritual adviser will try to always get the readers to find their own signature.  Yes by all means take in the experiences of these advisers but never actually live by their signature, their own life experiences.  This I’m afraid happens a lot within spirituality. Other people’s signature will affect our own signature if we are unaware, this is why so many spiritually aware people meditate or take on a spiritual practice that will reconnect them to their own signature.

Nature or Gaia is another very good way to become reconnected to your own vibrational signature, the more we connect to nature the more we connect to our own signature.  Why is reconnecting to nature so beneficial? Nature is the prime influencer of our signature; it’s very much a part of us as we are a part of nature, it has no purpose to influence us forcefully, when it does forcefully influence us it doesn’t do it purposely, it has nothing to gain from this other than to give us experience.  Other signatures forced upon us by other people are of a purpose, to force everyone to live by their own signature.  Nature isn’t this purposeful within it’s intent because it has no intent except to be there for us to attain experience and through such experience know about our whole selves a lot better, in other words become a lot more aware.

I thought I would finish off with a question posed to me in relation to my last post.

@Mathew
Would you agree that emotions are vibrations and that remembering them might be called soul retrieval?﻿

My Reply
Interesting, it's really good we all see things in a different perspective; it teaches us all to look outside the square.

Emotions are certainly vibrational and are a major part in our own vibrational signature, is remembering our emotions called soul retrieval? An interesting question that has never come to my mind.

Our vibrational signature was created through our experiences, not just in this life but through every experience we have had from previous lives, this also includes every emotion we have gone through.

Our soul, before it was influenced by experiences within these lives, had a vibrational signature of the divine, it was untouched and pure, this is our true vibrational signature I believe.  Now as we go through these experiences from life to life, we change this signature through various experiences and emotions expressed, we have a choice in what we want to affect us and what we don’t at the human and soul level.  For an example, we don’t have to become a mass murderer but some of us do, this can be due to a mental disorder at the human level which is brought on by the soul choosing to be a mass murderer.  We can’t experience anything in life unless the soul chooses so.

In pass lives I wasn’t always a nice bloke, I remember my emotions from past lives that are quite inhuman, this gives me a better understanding of such inhumanity which has influenced my signature in a very constructive way, I don’t today judge inhumanity in the way I use too now I remember my past emotions.

If we were all living in pure bliss and were confronted with utter terror, we would act quite badly to that terror but if we understood this terror, we would act more appropriately.  Going through the experiences we are going through actually strengthens our signature through understanding instead of just shunning.  Nothing can be experienced that we too are not a part of so it’s wise to understand every part of ourselves, remembering our emotions certainly helps with this. Yes I would certainly say remembering our emotions is soul retrieval.

My advice would be is to live by your own signature; your own life experiences not someone else’s, yes by all means allow other people’s experiences to influence your own vibrational signature but never allow them to change your signature to something you don’t want it to be, you do indeed have a choice.
Posted by Mathew Naismith at 10:22 No comments:

I awoke to morning & thought about writing up about how we all are attached to one thing or another which keeps us all grounded to realties like this one for without these attachments we couldn’t be here & then I thought indifferent to writing this thought up. While going through my emails I came across an email redirecting me to a hub about soul retrievers which of course I have never heard of before. While reading this hub I got the funny idea that soul retrieving was about helping souls after the demise of the human vessel self by showing them how to become detached from any attachments that might be holding them back from going on.  Obviously synchronism played a part here for it was all I needed to wright my to morning thoughts down.  The related link is directly below.

New Age Spirituality (NAS): I shouldn’t just make reference to just new age spirituality but I will in this case however it can be of any new age thought in any ideological belief system new or old that anyone wants to follow or is following at present. In actual fact a lot of NAS isn’t new age at all but new to most westerners so I will refer to it as new seen as I’m a westerner myself.

Realities of attachments are of realities of time & space & have their place & use mainly for our souls to grow & experience the collective consciousness’s knowing I believe so trying to change realities like this one to non-attachments totally will have a detrimental effect not just physically but at the soul level as well.  NA spiritualists are here to give balance to a realm in trouble not replace it with something else but we are going to ascend into a much better reality so why be fearful of the demise of such a destructive & disruptive reality? Other than the reason mentioned before, yes we will ascend however not all of us want to ascend so destroying this reality/world is very humanly selfish plus believe it or not we will want to return after finding out about what this reality was really all about which can only come from further conscious awareness at the soul level which is obtained from realities like this one, a cliché you could say.

This whole reality is all about attachments & our unattached souls came here to learn about itself & the collective consciousness through different attachments/experiences & yes at times fixated attachments like we are going through now but the problem is when to become detached before we destroy this reality that has served us so well.  Many of us have become so attached to this reality that it’s become a fixation that has overridden our common & sixth sense so in comes the NAS with their NAT to the rescue however we too must balance out the NAT with common & sixth sense as well because it’s so easy for a human being to be overwhelmed by the NAT & lose all sense especially while experiencing so many chaotic extremes & this is where psychology can come to our rescue if we are truly open minded enough.
Posted by Mathew Naismith at 12:22 No comments: