The Illusion of Facts 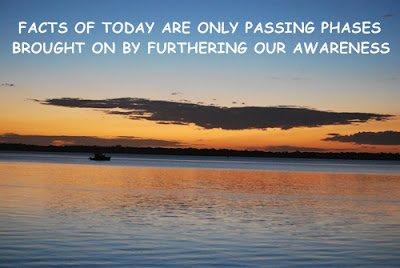 I’m in discussion at present with other people who seemingly think only logically & facts of course are the basis of logic because only through logic does it seems we can attain facts which I’m going to try to prove isn’t the case & in fact facts are actually an illusion. I will also point out that logical people who work on facts only are in actual fact less logical than spiritually aware people.

First I would like to point out logic is eternal where’s facts aren’t for the main reason logical reasoning & deductions change with awareness where’s facts don’t, this is because facts pertain to the truth but they only pertain to the present truth not the eternal truth. Look at it this way, it’s fact that we are here right now however will we be here as we are now in two hundred years’ time or will this universe always be? The answer is no they won’t because all we can do logically is work on the facts of our present awareness, we can’t think past our present conscious awareness so what we deem as facts today will change as they have always changed right throughout human history. Take a look how the Earth was deemed as being flat, that was fact & the sun a God, that was fact but we are more aware now so these facts of the past are no longer facts.

Many times have I confronted people who can only think logically saying that they are about logic & facts where’s I’m only about faith & fantasy & at first glance that is what it seems like but that actually isn’t the case. If we looked at most logically minded people what do they support, a system that is destroying ourselves & our environment, what’s so logical about that but most spiritually aware people desire oneness & harmony, what’s more logical here?  What I’m actually saying is  spiritually aware people are actually more logical than supposed logically minded people & these same people base all their faith on facts which only pertain to the present but spiritually aware people’s faith is eternal usually.

I’m also going to say we have all been duped in believing logically minded people are all about facts & are more logical within their thinking compared to spiritually aware people, because they are about facts they must be more logical but that is a fallacy obviously. What’s more logical, pertaining facts to just the present or knowing that facts are an illusion because they are only of the present? The word fact denotes truth but it doesn’t denote eternal truth, spiritually aware people realise there is no eternal truth in realities like this one & this is why facts are an illusion, here one minute gone the next.  Conscious awareness is forever changing & with this facts can only be of the now however logical reasoning & deductions change with our awareness. Think on this, what is going to happen when we do change from this chaotic waring existence to a more loving harmonious existence? Our logical reasoning & deduction will also change but hopefully at that stage we will know that too isn’t of fact (utter eternal truth).

The following response is from someone finding it difficult in understand where I am coming from, I’ve also inserted my reply to such misunderstandings.

+Mathew Naismith don't take this as a personal attack, it's just that your reasoning reminds me of my bartender days talking to customers, are you sober?
You are not making any sense to me, anyone else feel the same? ﻿

+Gerald Sienkiewicz Actually Gerald I didn't take it to heart in actual fact I laughed at what you said as I can understand where you are coming from.

I suppose the first person to say that we will walk on the moon one day was also laughed at like any new concept of understanding.  All I'm doing is trying to show a different perspective of facts & logic & failing obviously which is OK.

We tend to relate logic only to facts which I don't think is the case & that any given fact of today might not be fact tomorrow. I also think we put too much emphasis on facts that aren't eternal & that we should rely more  on logic's as logic's change with awareness where's facts just get replaced with others facts brought on by furthering our awareness.

I think we can also hinder our awareness by stating something as being fact that's it, in this lays stagnation because we won't look further because we think we have the facts when we don't.

There is a big problem with this conscious change, a lot of spiritually aware people will tend to think quite differently than what they did before & often most people won’t understand where these new age thinkers are coming from which of course is fair enough.     ﻿

Posted by Mathew Naismith at 15:19 No comments: