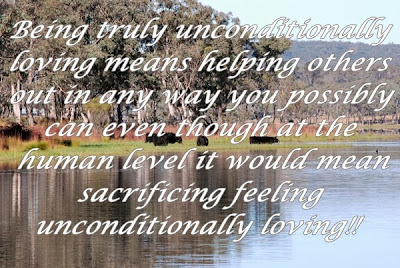 Who helps others repay their own debt?  If we are repaying our debt in this or the next life one cannot repay a debt without other people/souls assisting in this because usually a debt has occurred through other people/souls involvement in the first place.  For a scenario let’s say all of us became unconditional loving people, how would a debt be re-payed in this case? The problem is it wouldn’t because to repay a debt one needs others to either do the same onto them or chastise them in a way that they repay their debt, someone who’s unconditionally loving at the human level isn’t going to be able to help others in this way. You could also look at the people helping others repay their debt in this case as accumulating bad karma themselves thus adding to the collective debt however that’s not the case.

The reason I wrote this post up is recently I came across someone who is accumulating bad debt in this life, it’s pretty obvious she’s not helping to repay someone else’s debt because this lass has hurt a number of people for her own personal gain. Harassing disabled people until they leave their homes & most of their belongings isn’t what I would call accumulating dharma.

Anyway I stood back because realizing what was going on for the main fact I wasn’t called upon plus these people being hassled were making their own plans & thought they had everything under control. I soon stepped in realizing they were playing right into her hands. You can’t fraudulently hassle the average person out of their belongings & abode as this lass has done in the past as well but to behave in this manner towards people with disabilities isn’t tolerated at all. I soon contacted the appropriate authorities within the disability field of such mannerism towards these disabled people by able people & yes she will have to repay her karmic debt.  You would just have to think how many life times this soul has been doing this!!  The possibility of her going to jail is great because she was also fraudulent to the government while working as a supposed carer.