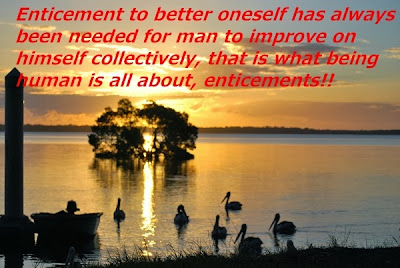 On the human level it’s a huge deal. Each & every conscious change this species has gone through has ascended us to a higher human development mainly through changes of our modes of thoughts. Yes for sure there has been set backs like with the dark ages for example however we might have taken one step back in our collective consciousness but we have taken far more steps forward than backwards obviously. It would seem we have reached a plateau in our human development, if we go on any further in the way we are still thinking this species isn’t going to be around much longer, so what comes next? Ascension to a different way of thinking all together.

As a species we can no longer ascend along the lines we are without causing our own demise, this isn’t saying we have reached our peak in technological development only in the way we are reaching for this development. At the moment we don’t seem to care what cause & effects that this technological development has on ourselves & the environment which shows us exactly how our modes of thought have got to change too. At the moment we are gorging ourselves on consumerist materialism & a lot of us can’t see or don’t want to see any other alternative & not necessarily just at the human level either. What is the alternative for a consumerist materialist at present that is going to be more appealing? If we were all ascended to a higher conscious level this question wouldn’t even materialise but because we are still at this particular level of understanding this question is very important to the majority of people. So what is the alternative that’s going to seem more ascending to us at the human level?

We must remember the majority of humans want to better themselves in some way, if we can’t see a better ascension level than what we have now why put all our cards on the table when we could lose what we have for something quite unknown? For humans to ascend they need a carrot to entice them to lay down their cards without total loss or taking a step backwards from their present ascension level, they are just not humanly going to do it & can you blame them? The majority of people either don’t know what to do or they are happy with the way things are going only because they can’t see an alternative to replace what they have at present. It really comes down to the minority to show the way who know how to ascend to a better way of thinking & existing. Believe it or not there are people up top running the show who just don’t know what to do next, they are solely relying on technological advancement to bring us out of this mess but without losing the benefits of consumerist materialism however they are not sure if this is going to work & this is where a total change of our modes of thoughts is going to change things around for us.  Yes we will still ascend within our technological advancements but we will have the wisdom to know how to keep ascending within these advancements without destroying ourselves.

Now this leaves us with the nitty gritty. There are also people who don’t wish to ascend themselves not just because they have fixated attachments to this physical world/reality but because ascension is no big deal to them plus to desire to ascend relates to egotism which they have no desire or need to express however this is only at the personal level. Collectively it is obvious we need to ascend to a higher level of thought at the human level so really we need these people to show us the way but will they when any kind of ascension is no big deal to them? Most definitely they will even if they don’t personally want too because they will feel what needs to be done & they will eventually just do what needs to be done mainly because that is one of the reasons they are here.

To think in a totally different way to the way we have been brought up with isn’t easy so we need these carrots to show us the way. These carrots will come in many forms to entice us to leave these old modes of thought behind us so we may ascend even further without harming ourselves or our environment any further. These are indeed wise old carrots who themselves wish to not ascend but realise the only way we, as a collective species, can survive is for all of us to ascend to at least a different way of thinking.

Posted by Mathew Naismith at 09:27 No comments: