Existing by Past and Future Events 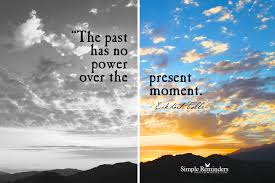 This post is obviously going to be a follow on from my last post. In the seven (7) odd years of sharing my insights and changelings through blogs, I have never really touched on (written) this subject before, probably because I seem to exist and create my own reality from the present rather than from past and/or future events. Yes, people like me are guided by past and predicted future events, but we never base our present existence on past and/or future events.

Conditioning: Consider this, why base our present on predicted future events, either constructively or destructively? It's all to do with fear. If we predominantly focus on a predicted bright secure future, we do this out of fear of the present. This makes sense to a fearful person to do this because the present is anything but secure, so to obtain a sense of security, we predominantly focus on a predicted secure future. The same is with focusing on an insecure future, like the end of the world for example; it's all based on fear. So why not just focus on the present and not mention about past or future events? Many of us are simply not aware of what we are doing. Instead of moving away or evolving (ascending) from an existence based on fear, we are escalating further into fear at a phenomenal rate.

As we are conditioned to time, we are also conditioned to fear, this doesn't mean that time is based on fear though, it means that within time fear can be experienced or not. As time is all about starting and ending points, we can either go with the flow of these starting and ending points, either it be of actual life and death, rich and poor, hungry and satisfied, which is of fearlessness, or we can try to go against the flow which is fearful. I do find that the Western mind is more fearful than the Eastern mind, probably because the Eastern mind from birth was once conditioned to go with the flow where the Western mind is conditioned to go against the flow; of course this is just my opinion.

Western Mind: How many Western minded people take on, become aware of, Eastern practices like living in the present but still predominantly base this present on a predicted future event? When an Eastern mind takes on living within the present, they don't base this on some predicted future event, like so many western minded people obviously do today, they predominately focus on the present while only being guided by the past and future.

Yes, as the world becomes more predominately of the western mind, we will experience more of a reality based on fear. How many people fear looking old today or fear losing some material possessions? Yes, this kind of fear, to one extent or another, has been around forever as the Western mind is not just of Western people, it's of all people. I today relate materialism to the Western mind as most western people are conditioned from birth to materialism, especially these days. Materialism is purely based on fear, the fear of not having enough to the fear of not having it at all.

It is too obvious to people like me that we are presently using the past and the future to create the present instead of using them as a guide. The ironical thing is that the past and the future is unable to exist without the present, everything relies purely on the present, instead of this, we are conditioned to believe everything is created from past and future events. The present is of and created from past and/or future events, in my mind, this simply isn't the case, or more precisely, need not be the case.

In my mind, we need to learn to use the past and future simply as a guide and not to create the present based predominantly on past and especially on future events. Leave the present alone to go with the natural flow of the present, within this, I believe that these prophesised predictions of security, peace and love will materialise, if not, we will change these predictions to anything else but of security, peace and love.

Manifestation: So if we focus on predicted future events of security, peace and love, will this not manifest this within the present? In my mind, absolutely not. The reason for this is simply based on that it's the present that creates everything, not a manifestation of a future event to influence (change) the present. Ask yourself honesty why you are looking for the future to change the present. The answer to this is fear of the insecurities of the present, so we try to manifest a present from a predicted brighter future? This is of course is instead of changing the present itself to something of security, peace and love.

If we all learnt to just simply be within the now (present), in my mind, all of what is favourably predicted would quite instantly materialise. Take away the effects of what a past and future, negative and positive, black and white, have upon us, all you are left with is the now, yin and yang as one.
Posted by Mathew Naismith at 07:45 No comments: