Spirituality and the Big Picture 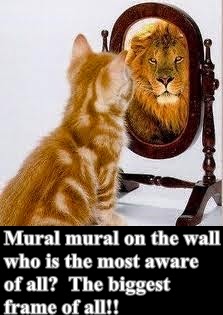 First of all I need to define what I perceive as the big picture to start with, what is the big picture? The big picture, as opposed to the small picture, is looking at the whole of existence holistically without humanly perceiving through human perception only. If you could imagine looking at an empty frame upon a wall with the wall outside of this frame obscured, what frame is making us more aware of what the mural, a big frame or a small frame? The answer of course is the big frame which gives us a bigger picture of the mural.

When I was in my teens, I was trained to look at the big picture and yes it does take training or reprogramming of the mind to see the big picture from the small picture. Because most humans, from birth, are conditioned to only look at the small picture that is all they will see. To see the big picture we need to be reprogramed first then from there become aware of this bigger picture. This reprogramming entails us to learn to stop obscuring this bigger picture with what we have been conditioned too which is only being aware of the smaller picture.  This might seem easy but it’s not.

You can’t ask the psyche to instantly accept becoming more aware of the mural, which in this case is represented by the whole of physical & nonphysical existence holistically, the psyche isn’t going to respond straight off without some sort of trauma. When a bigger picture is presented, most people just go into denial mainly because of the psychological dilemma brought on by realising there is more to what they have been conditioned too all this time. This conditioning is quite difficult for a lot of people to overcome plus they usually can’t see the benefits of being aware of more than they need to be aware of, this is where spiritual awareness can assist in overcoming these mental traumas I believe.

This brings us to the small picture, what brings about this conditioning to only becoming aware of the small picture?  To put it simply, human ideologies, belief systems & concepts which entail anything from religion to the science, yes I’m also into science/psychology but I realise the short falls of the concepts of science/psychology. These concepts, brought about by science/psychology, are hindered by being able to only become aware of part of the mural painted on the wall while looking through a small frame upon this wall instead of a larger frame.  In other words, science/psychology, & certain religions & so forth, can only make us aware of part of existence as a whole as does a small fame on a mural wall does.  This is caused by these ideologies, belief systems & concepts which are limited by human conscious understanding; anything else beyond this understanding is met with a brick wall (blatant ignorance) usually.

So is this saying these ideologies, belief systems & concepts influenced by religion, science/psychology and so forth, are irrelevant in being able to see the big picture? Not at all, actually they can enhance the size of the frame we are looking through thus enabling us to become more aware of the mural on the wall which in this case is represented by existence as a whole.  Imagine for a moment that this mural upon the wall represents existence as a, which includes being able to reason religiously, scientifically & psychologically. The problem with these ideologies, belief systems & concepts is we have become fixated to them thus preventing us becoming aware of anything more than they show us.  To break this fixation we need to acknowledge that there is more than looking at existence as a whole through a small frame of mind of human ideologies, belief systems & concepts.

You should be able to see why now we need to experience & understand life in every way possible, giving us a much bigger frame to look upon existence as a whole. We can then look upon the mural on the wall and become more aware of what this mural is all about holistically.
Posted by Mathew Naismith at 09:55 No comments: