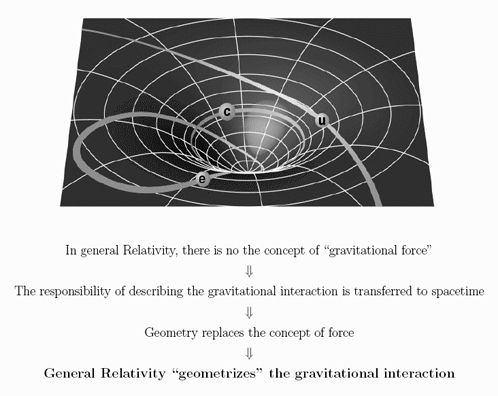 This is a tricky question because I could quite easily say no as it’s obvious we feel more not less however to answer this more clearly we need to look at ourselves, while becoming more connected, being not just more connected to our inner selves or God but to a core a centre point of creation very similar to our universe, a lot of people in the world call this centre point of creation God. We must remember here that everything is connected so the same laws of existence apply to all, human or not, thus the universe that we are still finding out about collates with how we were created in the first place.

Curved Space & Consciousness: The universe has a centre point with a lot of outer point (galaxies) seemingly projecting themselves away from the centre point but because of space curvature these galaxies  aren’t exactly expanding out in a straight line as this is shown when two galaxies collide & join up. If we have a centre point of extraction/expansion everything from that centre point would fly away from all other matter however this isn’t the case for the main reason space is curved. The link supplied below explains this in quite a simple way. 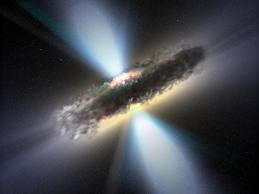 So what has this to do with our emotions & how we were initially created? When the universe was first created it expanded away from a central point of origin now look at the centre point of creation of consciousness in the same way, we have a core & from this core instead of galaxies forming we have in our case souls forming now imagine these souls expanding through emotional experiences instead of dust & gas & at the same time seemingly moving away from the centre point of origin but just like our universe this consciousness has curves as well. If we expanded away in a straight line it would seem the further we expand away from this centre point the more emotional we will become & the more emotional we become the more egotistical & judgmental we will be therefore more aggressive & conflictive but we exist in a curved consciousness just like the galaxies exist in curved space therefore we aren’t necessarily going to get more emotional therefore more conflictive.  What will happen is what is happening; we are expanding our soul’s consciousness through various degrees of emotional experiences & the further we venture out away from the stable collective core the more extreme our emotional experiences will be.

Centre Point of Creation: Below is an illustration showing the centre point of expansion from the inner ring to the outer ring, in this case I’m going to say that the outer ring represents our highly collective emotional state of consciousness at this time being.  If we were to move towards the centre point this would represent a closer connectedness to the creative point. Let’s say if we moved two or three rings in, we would probably feel a huge wave of love however this is only brought on by our emotional state we live in at present because of the difference in emotional consciousness’s.  This sounds as if we get more emotional as we go in as well however this emotion is only brought on by the different contrast of one emotional conscious state to another, because we live in a chaotic aggressive reality any other reality is going to seem quite different & even extreme however it’s only the outer rings that are really extreme. 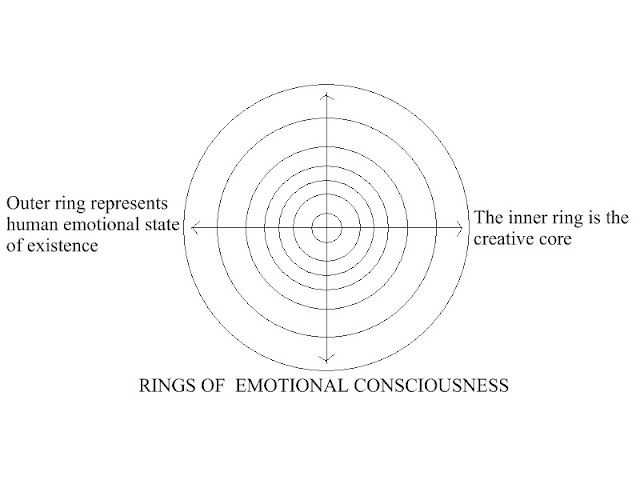 So why do these feeling we get while becoming more connected seem extreme or very strong as we go in? Can you imagine right now living in utter peace & tranquillity? This utter peace & tranquillity feels like love & in actual fact heaven if you like however if you stayed within this state of emotional consciousness the feeling of extreme love would fade away but by reconnecting now & again the feeling of love will stay strong.  If you had a chat with a spiritually aware person who consistently stayed connected to this state they would say to you it’s no big deal for the main reason they have adapted their lives in accordance with their experiences in these other states of emotional consciousness’s, they have become less spasmodically emotional & more controlled & balanced like the central creative point or core, in other words more knowing & wiser.

Is this saying that the central point of origin, the core, is unemotional?  No but it would seem like that to a human if they projected themselves directly within this centre point for a period of time. Most spiritually aware people who become connected to one extent or another to this reality of no time & space can experience a sea of endless love however because we are coming from a chaotic conflictive world the emotional extremes of this love will be quite extreme in itself because of the comparisons. Most people will only see that this reality of no time & space of being completely made of love nothing else.   The point of origin or core of creation can’t be just of love as no other emotion would exist as it couldn’t because it’s the very point of creation however it’s not cold either as that also couldn’t be so, so what is this core made of? For starters you & me however the core itself doesn’t have prejudices or judgment as it just is, why does it have to be something we can relate too to judge if it’s one or the other?

The core itself is everything but nothing, it is everything because we are individually apart of this core which is of everything however it is nothing on its own without us, the core can only exist through us. Don’t get me wrong I’m not saying this core didn’t exist at all it just didn’t exist within our emotional understanding as everything we relate too is of emotions, for example, if we were totally unemotional nothing would exist that was man made as we wouldn’t have emotions to drive us to create or build, collectively this also includes the universes as it’s all of a connected consciousness.  So what it seems like I am saying is that everything in existence as we know it was created through emotions!! Yes most definitely, everything in our physical universe was made up of small particles of dust & gas including humans so why couldn’t all of existence be created from emotions.  We had small particles of matter & anti-matter create a huge universe & living matter why would it be so unreal for emotions to create because if you look around you right now you will see what emotions can create just within our conscious understanding, Could you imagine what a higher emotional consciousness could create?
Posted by Mathew Naismith at 10:24 No comments: