Realisation of a Universal Reality 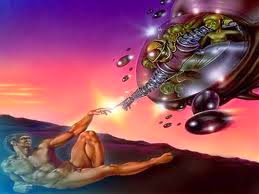 This is going to sound awfully wacky to a lot of people but I suppose what’s new with me, I’ve got to do what is expected of me of course.  As I become detached from various attachments brought on by our ego dominated reality, my awareness expands beyond this ego conditioning, just like anyone. This post describes what is coming from this expansion of awareness in relation to my past life in ancient Egypt which I became aware of three years ago.  I should say at this point that this life I perceived I had in ancient Egypt was confirmed by a total stranger who I had never conversed with before, Aluna Joy in the US.

A brief recap: I lived as a lowly priest sometime during the fourth dynasty in an unordinary priesthood, my main function was healer but others in this priesthood were into other science endeavours. I should also mention, there was priestesses as well within our order, none of us religiously payed homage to Gods/goddesses as such because we knew what these Gods and Goddesses actually were.

We also tried to free the slaves and give all workers better working conditions. When I received these visions of my past life, I thought we were banished for trying to free the slaves and not following the expected protocol of priests and priestesses at that time, which was in part paying homage to the Gods.  For some reason I didn’t realise, at the time of my visions of my past life, that if you don’t pay homage to the Gods/Goddesses you are in turn not paying homage to the Pharaoh and his family’s line. Boy didn’t we push the boundaries….strangely enough I’m still pushing the boundaries in this life.

The next thing I realised was I thought we failed in our endeavour to save humanity from the present brutality and from the forthcoming predicted famine and disease that could have been prevented but I wasn’t quite correct in this assumption.  What dominating human trait do the Pharaoh’s possess and use most often?  We were banished primarily for this reason and the reason for our banishment was ego!!  Because we didn’t pay the expected homage to the Gods/Goddesses/Pharaoh the Pharaoh took offence, we were banished by egotism, this is human history and human reality however it’s not universal reality. What happened in human reality was quite different to what happened in the universal reality so I realised recently.

Why am I calling one reality human and the other universal?

The outcome of my time in ancient Egypt was different in a human ego dominated reality compared to the universal reality, how could the outcome be different when we are only aware of this human reality, am I also living in this universal reality with a different outcome?  Yes, but of course the ego doesn’t want to know this so it makes us believe we can’t possibly be living out in at least two realities at the same time. We should remember, the way we perceive time isn’t the same in other realities, time isn’t a dominating factor in the universal reality so time doesn’t interfere with it’s workings or the way consciousness reacts to itself.  We honestly perceive way too much in a reality that is primarily dominated by certain fixated perceptions, I have the understanding this doesn’t occur in this universal reality I’m talking about here.

I realise now we didn’t fail while living my life in ancient Egypt, only in our ego dominated human perception did we fail which counts for what? No wonder I laugh at myself and everything else of this reality so much these days, this reality is really a joke but a joke worth correcting if we are willing enough…….How do we correct it? Firstly by realising we are not conscious of the main reality, (this universal reality), and becoming more familiar with this universal reality I’m talking about here.  By just being aware of a totally more truer reality can change this reality quite dramatically but we have got to really want this and the way to do this is stop the controlling factors of the ego dominating us so much which some of us are doing.