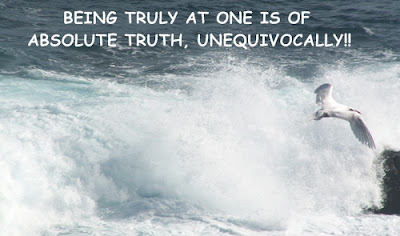 I had a person ask me for more information on being at one v feeling at one so I added my reply to this person at the end of this post which I hope will help others define more clearly in where I am coming from.

To be truly at one we would have to be of absolute truth otherwise we couldn’t truly be at one because we only have half-truths so anyone with half-truths can’t be truly at one, we can feel at one but we can’t truly be at one however like I said the closer we are to the source the more of the absolute truth we become aware of & the more at one we will be not just feel.

So what this is saying is being at one denotes absolute truth where’s just feeling at one denotes half absolute truths but we must remember none of us beings can obtain absolute truth & one should never try as all you would be doing is flogging a dead horse especially if it’s not meant to happen. We should also remember here that emotional driven desire to feel good through various spiritual practices like denouncing the ego for instance actually takes you away from true oneness, it will give you a feeling of oneness but it won’t give you true oneness which denotes half absolute truths.

Don’t take what I say is truth & it’s certainly isn’t absolute truth it’s just my interpretation of truth through my own perception because I am also still learning myself.

What I did here is relate oneness to half-truths & absolute truth. Feeling at one is related to half absolute truths where’s being at one with the universal conscious is absolute truth which is very difficult for emotional humans to do I believe but of course not impossible. I have the understanding Jesus & Buddha for instance might have accomplished this, to some degree anyway.

Most people here on IS have begun the first stage of knowing about absolute truth which is the universal consciousness or source, once we start feeling this oneness we have made a connection however we can at times think we have the absolute truth at this stage which of course we don’t. This feeling alone is very important but one must beware not to get emotionally carried away with it which is extremely hard not to do, most of us do this at one time or another at this stage.

As we become more connected or closer to the source absolute truths become a little more apparent & at a certain stage they just flow as if by magic without any effort. When this happens you know you are quite close to the source & are starting to become being at one with the source instead of just feeling at one. Until we get to this stage one should always be wary of how our human emotions play tricks on us telling us we know it all & what I perceive is absolute truth. There are indeed pit falls in becoming aware & it’s certainly not an easy road to tread but a road, in my mind, worth traveling.

The biggest trick is, is actually knowing not just believing we are one entity & then the next trick is if we want too is actually being that one entity but of course many of us like myself won’t attain this & I don’t think we should even try unless it’s necessary.

I hope this cleared it up for you Whitewave remembering I’m only talking in half truths.

Love
Mathew
Posted by Mathew Naismith at 10:55 No comments: