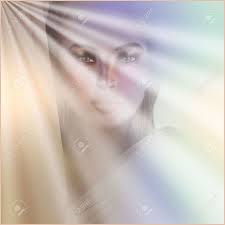 Apparition is usually used in reference to ghostly figures, spirits or even souls, in this case, an apparition is a life like image of a 3rd dimensional physical aspect. Also in this case, an apparition has an appearance of a 3rd dimensional physical aspect without actually being of a solid form. It's very much like thought, we most often imagine a physical form or creation expressing itself as if it was already physically created and alive. Our dreams are another good example of these kinds of apparitions
which at times feel very much alive, even after we have awoken from a life like dream.

The trick with apportions is they take on a 3rd dimensional appearance without actually being of a true 3rd dimensional solid form. To me, apparitions are like our dreams and imaginations, I don't actually separate apparitions from our dreams and imaginations, to me they all represent an expression  of consciousness of some kind. Because I also believe all of creation was created from a consciousness, all of creation can also appear as an apparition. This is like what I have called a blue print plan or what is known to some people as a holograph image of 3rd dimensional solid form. What is being said here is that the apparition of all creation came before  actual physical creation occurred, this is very much like an invention, it takes form in the imagination before it's created in solid form. Basically, when an apportion takes on a solid form, it becomes denser and more solid.

3rd dimensional perception might also influence us to think there is separation between time and timelessness, a separation between an expression of consciousness and a non-expression of consciousness which creates an illusion and a non-illusion. I couldn't think of anything more that represents separation than a perception of a non-illusion and an illusion. The point is, we are never just non-expressional nor expressional of consciousness, we are and have always been of both aspects, the illusion is thinking we are only of one or the other aspect in my mind.

Apparitions are the same, apparitions are of neither one or the other, they are not just of a conscious aspect or a physical aspect, they are however a depiction of both aspects. I think in the 3rd dimension we underestimate the importance of apparitions in our daily lives, they are indeed very significant in more than one way.
Posted by Mathew Naismith at 12:50 No comments:

I always appreciate queries upon what I write, it most often shines light on where there was darkness, at times this also makes me see a lot clearer as well. We need each other to shine this light, we certainly can't do this on our own as the following clearly shows. The following was in relation to my post on chain reaction.

I feel chain reactions is the wrong term. Do you not think it’s more like a TV screen the things on the screen move but in reality they go no-where…the pixels change to give the illusion of movement. We live in what seems to be cause and effect universe i.e. we have motion as does the world around us giving us a view that is linear. one step in front of the other but again that’s not to say things that vibrate at a higher frequency can’t exist within our universe. For instance if our life was 2d the 3d would need to exist in order for my 2d universe to exist

Just because consciousness is expressed doesn't mean all expressions of consciousness are an illusion. even though we can be deluded in thinking this is all we are.

Everything has always existed because consciousness before it's expressed is in a timeless state, therefore, there is no starting or ending point of creation or expression, so yes, 2D and 3D have therefore always existed.

I'm kind of confused at what it is you are trying to portray with the term chain reaction. Your statement about Buddha and Jesus ending there cycle when they physically died for instance. I'm not very religious but are not both characters the ones that ascended while physical breaking the cycle of death.

MY REPLY
They didn't actually break the cycle of death, their physical selves still died because the physical self is determined by a cycle of time.

The conscious self is a different matter, it's not determined by cycles of time and have always existed.

Also after reading your article I’m not sure of your point either are you trying to suggest, we have other realities outside of this one if so is that not a given?

MY REPLY
It's not a given to a lot of people who are only aware of their own reality, you and I know but many others don't or don't want to.

I certainly appreciate your queries Damon, queries most always shed light on where there was darkness.

3rd dimensional realities based on chain reactions is but another conditioning, once we are only able to perceive in 3rd dimensional views, this is all we will perceive.

Time and Space: What is time and space? To anyone conditioned to only perceive in 3rd dimension, time and  space are physical phenomena's, this perception of time and space will enact on anything within time and space. This means no living breathing physical form is able to venture in outer space unprotected without becoming deceased.

Apparitions: In my early years, I had numerous encounter with ghostly apparitions that could overcome the restrictions of physical boundaries and float through walls and ceilings, however there is something else to consider here, physical forms can also go through these ghostly apparitions. Because we can only perceive that time and space are of a physical phenomena, we are unable to travel through time and space unprotected from the elements, what if we perceived that time and space were also of a non-physical nature!! This is hard to perceive only because we are conditioned to predominantly perceive through 3rd dimensional aspects.

Everything within this reality/universe evolves around  a 3rd dimensional chain reaction, therefore, every other aspect of this reality has to evolve around the same perspectives. This isn't the only thing that occurs however, even within the same space and time. Time and space are also of a consciousness, it's like an apparition, a non-physical aspect of time and space. What happens when we die? We take on an apparition of our physical self, this apparition has always existed though. What I am saying is apparition existed before the physical self was created, in a sense, our physical form was created from an apparition, in other words from a form of consciousness. To me, all physical phenomena was created from apparitions, not the other way around like with ghosts for instance.

We think ghostly apparitions only occur after we pass on (die), this is because we are only looking at ghostly apparitions through a 3rd dimensional aspect, the emphasis in on you need to first have a physical form to create an apparition after we pass on, to me this isn't the case, this is wholly due to everything being created from a consciousness. What's consciousness before it's expressed as a physical phenomena, in other words what's consciousness before it's put into motion? When you observe this state, it very much like a ghostly apparition, in this state it is able to do anything as it's not confined to any set boundaries, this includes travelling through time and space.

Now within a reality based purely on a chain reaction, this is going to be inconceivable, what chain reaction is there within a apparition? You can see how this universe, that is based on chain reactions, has conditioned us to perceive predominantly through 3rd dimensional aspects.

It sounds as if I'm saying that the chain reaction is alive!! Most definitely and in my mind if we want to make a real difference, we need to perceive in the same way.
Posted by Mathew Naismith at 09:38 No comments: