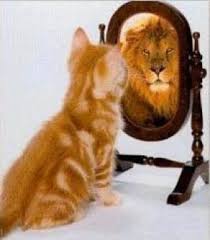 Are people being offensive or is it that our egos are offended when our egos desires are not being fed by other people? I am aware myself when I am offended, that it's only my ego that is being offended, not me as a collective consciousness. If only people's egos were aware in how small the ego is to our whole self, of course to make the ego aware of this, the ego is often offended that it's not of the entire self. "How dare you offend me in this way, I am all that you are". Not too far off in how the ego in control actually thinks, not that the ego in control desires to become aware of this of course.

Yes, as you can become offended by other people's views and actions, your own ego can become offended by your own views and actions. The ratio between people stating I am offensive to them when not feeding their egos is nothing compared to my own ego in my life. Your own ego doesn't desire to be offended so it will only accept what feeds it, everything else will be judged in accordance to it's offensiveness to the ego in control. You could feed the ego everything in existence and it would still desire more, multinationals are a prime example of this. If you gave the multinationals the whole universe, would not their own controlling egos desire even more, as of any ego in control?

It's really strange for people like me; observing a reality primarily created to feed the desires of the controlling ego, where balance of the ego is shunned or denounced at all cost. A reality like this isn't strange within itself, for only a controlling ego can create such a reality as it's natural for a controlling ego to do. What is strange is observing this reality become self-destructive. You would think the ego would be self-preserving therefore embrace the balancing of itself to preserve it's existence but alas, the ego in control feeds on everything until there is nothing left for the ego to exist in or on.

I have simply lost count how many people I am supposed to have offended. As soon as people state or think this, I know they are not truly aware or aware of how defensive their own ego is to being offended. Yes, not feeding other people's controlling egos or even your own controlling ego is highly offensive to the ego in control. This is different compared to ego not in control, which simply means an ego that accepts being balanced in accordance to it's present environment. How often does an ego in control create its own environment in opposition to the present existing environment? How many spiritually aware people these days desire to do the exact same thing, to simply feed the pleasures of the egos? People like me don't feed people's egos, this is not what spirituality is supposed to be about but alas, once again the ego in control changes the present environment of spirituality to primarily serve the egos desires and pleasures!!

Think on this, do spiritual gurus or shamans deliberately go out to become enlightened? Did Jesus or Buddha purposely leave their current environment to become enlightened? No, what is purposely exercised is the detachments created by the ego, for example, desires and abuse. Enlightenment is simply a by-product of releasing yourself from the controlling ways of the ego; it can be at no time of the egos primary objective otherwise enlightenment simply won't occur. Yes, a thought of an enlightening experience is thought of but the main focus isn't on enlightenment but on releasing yourself from control altogether. Yes, to the ego releasing yourself from control seems like you are taking more control but in actuality your not, this is simply an egos perception, nothing more. The pleasure the ego feels from releasing yourself from control isn't to serve the ego, as the egos tries to make out, it's simply once again a by-product, in other words part of the process of detaching ourselves from control. This is exactly like unconditional love; unconditional love is simply a by-product of becoming aware and at no time should be abused and used as the primary objective or focus. This is exactly why the kind of unconditional love that comes from this isn't true unconditional love, it's simply becomes a desire of the controlling ego to feel more pleasure no matter what the cost is.

Sorry, if I am not going to feed my own ego desires, it is unlikely I will serve other people's egos desires, if the ego in control takes offence to this, so be it. I should also say, even when people are purposely being offensive and you are offended by this, it's simply your ego in control that is offended, not you as a whole or even your ego that is not in control. Try to become aware that your ego is a very small part of who you are as a whole; this alone should bring some balance to a controlling ego gone troppo if you are truly aware of this.

This is funny; the pic is of a cat looking in the mirror only seeing themselves as something grandiose as a lion. We are all of what is, not what our egos only desire to be of.

Posted by Mathew Naismith at 08:21 No comments: