Being Spiritual in Oneself 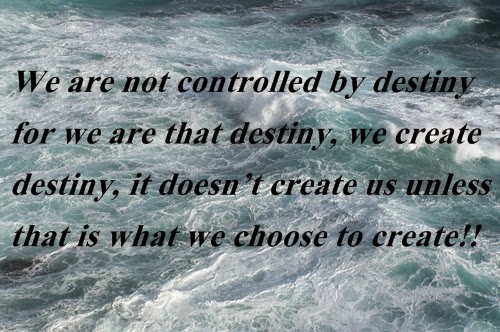 The following was a reply I received in regards to my last post, it made perfect sense, spiritual awareness, as opposed to being spiritual in oneself, is about the collective learning to live within each other’s space. I however still sense a misunderstanding of what being spiritual in oneself, being in one’s own space, is about which is quite understandable, this is why I feel I need to explain this a little better than I have previously.

Yes that's correct, spirituality is to do with the collective collectively, however, being spiritual in oneself, which is being in one's own space, is quite different for a number of reasons.

Spiritual awareness is a lot of times about active intentions than passive intentions, this means we are living for a future, being in one’s own space is being spiritual in oneself,  this is all about living in the present moment only. When we have intentions to meditate for example, especially for a reason, this is about the future and at this point you’re not living in the present moment, in other words being in one’s own space.

Is one state better than the other? No, they both have a purpose; one is about the collective the other about being in one’s own space, this however doesn’t mean being in one own space isn’t about the collective, if we all learnt to be in our own space, our existence in this reality would change quite dramatically but that is very unlikely to happen for reasons given in the post.

You are utterly correct in my mind; spiritual awareness is about the collective and learning to live within each other’s space, on the other hand, being in one’s own space is more to do in being, not learning to be, but actually being in each other’s space, there is no learning because you automatically just be. The reason for this is we have little to no intentions and if we have little to no intention, we are only living in the present moment, living like this instantly  takes control away from the ego, you still have ego but the ego no longer has control.

Spiritual awareness, as opposed to being spiritual, doesn’t work this way, you still have intentions like bettering yourself in any way for example, being spiritual in oneself isn’t like this, there are no intentions of bettering yourself, it’s all about just being what you are not what your intentions make out what you are.  Intentions can indeed mislead us by taking our focus away from just being who you are, the past or present isn’t who you are and intentions are all about the past and future, however, living only within the present moment is who you are I believe.

So why doesn’t being in your own space seem conducive to the collective, it’s only about one’s own space after all is it not?

Being in your own space is more about a different collective than the human collective, it’s about a space that everything is connected to as a collective, a spiritual collective if you like as opposed to just a human collective, it’s this oneness we most often hear about and in this state we automatically become a part of the spiritual collective. In this state you become aware of what the whole human race is doing.  Spiritual awareness is more about the human collective and bettering ourselves at a human level through being spiritually aware, this of course also takes in being aware of being in our own space as well, that is why I think it’s important that we understand the difference between these two states of existence.

I’m never in a pure state of just being as I’m never in a pure state of intentions, however, I try to be aware of how a mix these two states together and especially aware that I can never try to use these two states at the exact same time, I’m either in the present moment or I have intentions at any given time.
Posted by Mathew Naismith at 09:09 No comments: