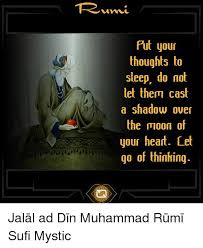 Written by Mathew Naismith
Rumi
Someone asked, “What is love?” I answered,
“You will know when you become ‘we.’”
http://acropolis.org.au/rumi-the-mystic/

We, is in reference to no exceptions of negative and positive, bad and good, wrong and right, theist and atheist, black and white, dark and light. An example, I am of the light; you being of the dark are not accepted as we.

The Western mind in all of us is about separation therefore creates opposition, hate.

The Eastern mind in all of us is about union therefore creates compatibility, love.

Humans, in their separate forms, are loving, be it through God or anti-God. This singular consciousness, God, void of separation is this love humans express. It is also wise to be aware that opposites are only in opposition when perceived separations occur!!

Posted by Mathew Naismith at 09:49 No comments: