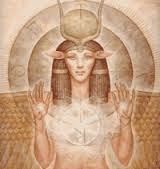 To acknowledge the following, you must be able to release yourself from other taught ideological principles and beliefs; this isn’t going to be easy for a few people, these people will probably have certain problems and issues with the following. In other words it’s probably pointless reading on if you are not truly opened minded.

To me everything is of consciousness, it was all created from consciousness no matter what it is, this also means anything we can imagine exists in one sense or another  to me, this of course includes what we have deemed to be God’s and Goddesses throughout history.  Do I think these God’s and Goddesses are actual God’s and Goddesses? No, but in a certain sense to us they are for a very good reason as I will explain by sharing a discussion I had with someone recently in relation to this.

It sounds like you believe you lived a past life in ancient Egypt when you were a priest. Do you remember anything else from that past life?

It sounds like you also believe that Isis and Horus are real but they are not what people think they are.

You feel the Christian / biblical God is the same as Isis and Horus. This contradicts Christianity I would say. Christianity doesn't recognize Zeus and the others. They are wrong about this regardless of what someone like Zeus really represents.

Some of this would involve the question of what does the term 'god' mean. What does it mean if we say someone is a god?﻿

My Reply
I remember I was very content with my own life in what I was doing, the only thing I wasn’t happy with was the mistreatment of slaves and workers, I also wasn’t happy when myself and other priests and priestesses were separated and banished to outlying areas.  This was all confirmed by a person who I have never met over the net.

Is it easy for physical form to take a non-physical existence?

Physical from is like throwing a ball into space that has no resistance what so ever, it needs very little effort so what is going to slow this ball down?  The ball in this case is representative of physical form.

Actually I don’t think the Christian God is like Isis and Horus, only in a conscious state do I think they are simular, the Christian God is representative of all of what is where Isis and Horus actually to me represent a certain conscious state. This state to me is representative of existing in duality while being in non-duality; this is not an easy state to acquire from a physical state of consciousness, this is why we find it so difficult.

I think I answered this, it’s a state of consciousness that can exist in duality while being in non-duality, it’s a conscious state that has no problems in being in physical form than it would in a non-physical form. Can these so called God’s stop a ball propelled at a great speed with no resistance what so ever? At a blink of an eye mainly because of their awareness brought about by being in non-duality while simultaneously existing in duality.

Let’s look at mediation in relation to slowing down time and our vibrations, how often do we feel time has slowed down while meditating?  Time can slow down quite significantly depending on the type and depth of the meditation experienced; this is due to our awareness, however, if you’re not aware while meditating you probably won’t experience time slowing down as much. Throwing a ball through space that has no resistance is quite similar to this, how are we going to experience a different state of consciousness when we are unable to slow down our present state of consciousness?

While thinking in a dualistic way, we perceive everything has to have an opposite like duality and non-duality so we have to choose which one to exist by, we certainly can’t possibly simultaneously exist within two opposing polarities. This is why so many people have chosen to denounce duality for non-duality, the funny thing is, within this thinking we are still dualistically thinking by our own actions in denouncing a supposed opposite like duality.  A true non-dualistic thinking person couldn’t see there is an opposite to start with, however this isn’t saying duality doesn’t exist.

The funny thing is we live within a world of opposites, the north and south poles are a good example of this, so why do we think we can’t live in the same conscious state as what we have deemed as God’s and Goddesses exist in?  In duality thinking, we perceive opposites but within non- duality thinking we replaced opposites with complimenting, its one consciousness complimenting itself in a reality of duality, there are no true opposites to denounce for everything is consciousness no matter what form it takes.