A Split in Consciousness 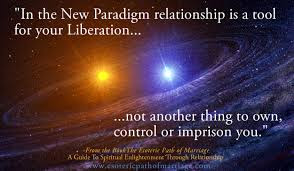 As I most often do, before I start writing about a particular subject, I try to research in material that is on a subject that I am about to write about. I also rely on actual experiences either it being my own and/or someone else's.

The following material I came across in my research is as follow. The external material I have presented here is worth reading through, even if you come to sections you don't agree with.

Extract: What is wrong with modern man – and woman? Particularly in the West, we are constantly dissatisfied, striving, looking for more, whether it is consumer goods, fame, fortune, power, a longer lifespan or spiritual kicks. As Anne Wilson Schaef (1987) has pointed out, we are living in an addictive society. Morris Berman is a cultural historian who has attempted to make sense of our malaise in a remarkable trilogy about the evolution of Western consciousness.

The person accepts the world as it presents itself, including the split between Self and World. Spirit is not separate, but is immanent within the world: it is ‘the smell of the forest after rain, the warm blood of the deer’ (ibid:11). In this way of being, the secular is the sacred.

And yet, I don’t share Berman’s disquiet about out-of-body experiences or altered states of consciousness. Can we not work against some of the unacceptable faces of the ascent model of consciousness while retaining transcendent religion? If I was graced with the experience of ecstatic fusion with God, I certainly wouldn’t say no. At the same time, I have got the message from Berman that it is time to stop searching above, behind and beyond and value what is here.

Actual Experience: After watching most of the James Bond (007) movies, as I have found in just about all media, sensationalism is becoming more and more extreme. The violence and brutality within the James Bond movies escalated, nothing was left to the imagination. This reminds me of the Roman arenas, where violence and brutality escalated over many years to the point of outright butchery. The senses of the people needed to be entertained to a greater extent each time, are we any different today?

Yes, we deceive ourselves more, people are not being brutalised in the movies therefore the media today is nothing like the Roman arenas!! This is after knowing that just about all the brutality that is depicted in the media today has and is occurring, most often to a greater degree than what is depicted in the media. Think of it like this, if you hear that people are being tortured in a certain way or children are being used a sex slaves, it's like a fungus, what you see growing above ground is nothing like what is bellow the ground.
Has, what I call the feel good industry, escalated to this point that we need to be entertained and/or made to feel good in some way on other people's suffering? If it doesn't tantalise our senses or makes us feel good it's negative!!

It is obvious to people like me that we don't want to sacrifice our security in feeling good. Any truth that threatens this is often simply judged as a negative, therefore subsequently ignored, or accepted as being an everyday part of life and ignored.

So what do we do to secure our feel good tantalisations? Create more media sensualism and/or create ideologies that ignore the negatives, like child abuse and torture, to feel good on a more regular basis. Being excessively positive takes ignoring the negatives, of course like the media and the Roman arenas, we need our senses tantalised more and more. It gets to the point that anything that doesn't tantalise our senses is judged as a negative.

So what are we manifesting? Materialism is manifesting what ideologies like love and light are manifesting, more suffering, not less. Think of it like this, what occurs when your child's disrespectful and rude behaviour is ignored? The act of ignoring this kind of behaviour just to feel good manifests worse behaviour, are we any different on a collective scale? There are a number of Western ideologies that are quite obvious in how unaware they are in what they are actually manifesting within their own actions and inactions.

However, what seems to be occurring is that a number of people are awakening to what we are doing on a collective scale by observing what is presently occurring, of course this does take a lot of self-honesty and honest self-observation. It is wise to look at the collective consciousness as the self, no matter how many parts this consciousness desires to split itself into just to feel good.

What would occur in my own relationship with my wife if I demanded that my wife makes me feel good on a regular basis? Probably the same with what occurs in a number of failed and/or discordant relationships!! If you have to use external sources to feel good, what does this say about the way you are leading your life? Look at the collective consciousness in the same way as personal relationship is my advice. The relationship isn't there to just make you feel good is it? Neither is the collective consciousness or existence as a whole, of course there are some people who demand that their relationships fulfil their desires to feel good on a regular basis, as they do media, the modern day Roman arena. It's simply a gift when a relationship makes you feel good, abusing this relationship in demanding more and more from this relationship is only going to end up creating more suffering, not less, as is being observed at present.

It is wise in life not to expect your immediate environment to be just there to fulfil your pleasurable desires on a constant basis. Think of it like love, love is not present to make you feel good, feeling good from love is a special gift that love can often create at times.......

Posted by Mathew Naismith at 09:35 No comments: