Learning to be Unintentionally Humble 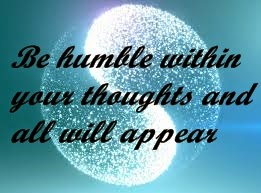 I had an interesting request recently from a very good internet friend of mine:  Hi Matthew,
I was wondering if you had any posts about Intention, something that would answer questions for beginners. Like, what is it and how can one use it to better one’s life. Is there a prerequisite concept needed before one can understand Intention?
If you can, can you share with me and ThunderBearVoice via a post?
Thank you.
SpiritRider2013. ﻿﻿

Any explanation about intentions is going to be a little complicated especially when we take in spirituality into the equation; this is mainly due to various practices used within spirituality, some use intentions other don’t.  In the main however most spiritual practices, especially eastern practices, take us to think less, meditation is but one of these practices and so is chanting as they both make you mentally focus on one factor. This allows the mind to stop thinking about everything else by focusing on one factor only, in this case our breathing or our focus on certain words spoken.

Intentions however have their places within spirituality, usually to do with the psychological issues, for example, if one finds this reality to be unsavoury in some way, they will need to first use intentions to meditate or chant more often, “I have all intentions to meditate more often every day to dispel any unsavouriness in my life”. Intentions are about us taking control of our psyche so we can seriously begin to meditate or chant, it’s basically to do with empowering ourselves.

Let’s us now use examples of how we all use un-intentions and intentions in our lives. Let’s use going to bed for an example, we are tired so we go to bed, this action is quite unintentional because our tiredness automatically says to us we need to go to bed, this is done without thought. Now what if we need to be somewhere early the next day, we then have an intention to go to bed to get up early the next day.

Now if we look at what intentions represents, (Intentions = thinking process + planed goals + future and past + purpose +control + empowerment), we can see it’s all about control either being controlling or controlled, this is the same with being empowered within oneself or other people being empowering over us.

Intentional control and empowerment has a different effect upon us and everyone else, it’s still about control where humbleness is about releasing control even though it can at times take more control to be humble than to be controlling. This is all due to being un-intentionally controlling through simple humbleness. Through learning to be humble, we are also thinking less as well also through this humbleness we are focused on ourselves through self-control, not focused on what is trying to control us, this actually takes a lot less thought.

If everyone was empowered and tried to take control of a situation, what would occur? Total chaos, what is our reality dominated by? Total chaos, would this be the same if everyone was humble? I feel we would all work together for the betterment of all, there is a huge deference in the outcome of being intentionally controlling and empowering to just being un-intentionally humble. To be humble doesn’t take intentions, being humble actually takes away our intentions of reacting either to ourselves or the rest of the world because it’s unsavoury to us in some way.  Just be accepting and humbleness will come ever so easily as the following will further explain.
http://www.wikihow.com/Be-Humble