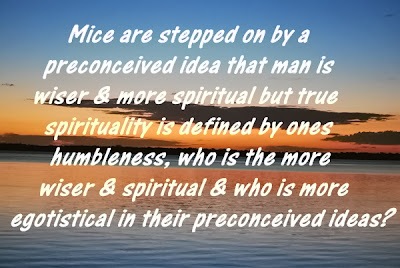 We need to look at this through the souls perceptive only, what would be more humbling to the soul, not the human, while taking in the human perception of lower/higher forms, what form would it choose to be, to be more humbling? At the human level we would probably say a maggot or a rat for instance but what if I said, “To be most humbling therefore spiritual was to be human”. What creature is more destructive & egotistical? What this is saying is to be more destructive & egotistical is more humbling at the soul level, however as humans we perceive this quite differently. Being more humbling is to be more spiritual so how can a more egotistical person be more spiritual than a non-egotistical person? To us at the human level of perception we can’t see this but what I am saying is at the soul level it’s quite a different story.