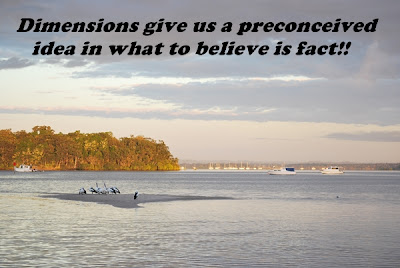 In any dimension our thoughts are influenced by that particular dimension, it is what makes that dimension what it is so are all these dimensions an illusion because all they are is abstract parts of consciousness? I will get back to this question latter but first how does this dimension make us think which will define what answer I give to the question I just asked. If I was to ask the same question in a different dimensional state of consciousness or mode of thought my answer, believe it or not, would be somewhat different so which answer is correct?  All the above believe it or not at the same time so to speak!!

I have inserted one of my replies to a good internet friend of mine below which will help shine more light on what I’m trying to portray here.

I know of other entities that live a more physical life than we do but the big difference is they have learnt how to use the ego in quite a different way to us.

You & I have one particular fundamental difference, I don't believe anything is of the illusion but I believe you do, neither of us are wrong at the same time it's just we are feeling in different dimensional modes of thought, this sounds ridiculous but it's not.

Take a nail for example, in this dimension the nail is a fastener but at the same time, as such, this same nail is something else in a different dimension & people & our thoughts are the same I believe.

While in mediative states we can & do to various degrees touch on these other dimensions however our prime mode of thought is 3rd dimensional for most people & this is what influences us to whatever we experience while meditating but we don’t think while in meditation!! Science has proven we do however this isn’t the point, how do ghosts/spirits & non-physical entities interact with us without thought?  We don’t need the physical brain to be aware & yes think in various dimensions which allows us to interact with other beings/entities in various dimensions. While in mediation we become further aware so our brain responds to this however because our brain is only programed to think in 3rd dimensional modes of thought we still perceive everything in a 3rd dimensional way.   This leads us back to the initial question, “so are all these dimensions an illusion because all they are is abstract parts of consciousness?” We have a perception of illusions existing because we are only thinking in a certain dimensional way which gives us the perception of illusions.

The following link is on an interesting science study on the mind which shows how the mind can be tricked in believing in something to be fact when it doesn’t have to be what we perceived as fact & this is only at the awareness level of the mind which is still in 3rd dimensional thinking modes as a whole.
http://www.scientificamerican.com/article.cfm?id=your-thoughts-can-release-abilities-beyond-normal-limits

You could look at these scientific studies & think that the mind is actually starting to think outside of it’s programmed 3rd dimensional modes of thought. What is happening isn’t illusions but a change of perception similar to what we get when meditating. So when our sight improves for example from when we had less vision does this less vision denote an illusion? It would seem so but no, just because we perceived an improved sight doesn’t mean our poor sight beforehand was an illusion; it was part of our perception brought on by 3rd dimensional thinking. This denotes a start & an end & in this case less vision to more vision just by our changed perception. Why does there have to be a start & an end but we perceive there to be so. So this still seems to be saying that 3rd dimensional thinking is an illusion however is it our 3rd dimensional minds telling us it’s an illusion, the real illusion could be that we perceive that these illusions actually exist.

So are these different dimensions that give us our modes of thought & following perception all an illusion? Yes if I was to only think & had a knowing in 3rd, 4rth or 5th dimensional waves but there are a lot more dimensions out there that give us a perception of something somewhat different to just saying everything is an illusion, it all just is.  Now we can’t just think everything just is, that’s illogical. Logic is but another thought process that changes with different dimensions, what’s logical in one dimension isn’t in the other which brings us back again to the nail.
Posted by Mathew Naismith at 10:37 No comments: