Spiritually Appreciative of all at the Soul Level 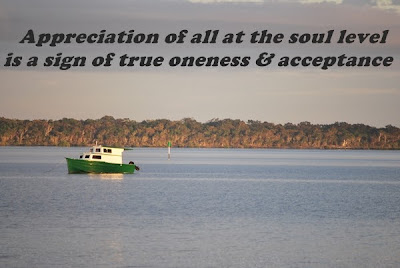 Recently I had a good internet friend of mine give me the following link to read to see what I thought of it, the following is my reply back to him.

Interesting Ernest. I've actually been writing up on attachments & fixated attachments & how we can take these attachments form life to life which we call karma in the last month or so. This is good confirmation for me.

I'm not wise myself as I love playing out ego tendencies, this is a bigger wow to me than feeling at one strangely enough!!

The real illusion/delusion is only thinking physicality is all there is as this is only a portion of the universal consciousness which is dictated to us by our human emotions, taking control & balancing out the human emotions gives us wisdom in my mind.

So this explains why some people choose & read certain articles pertaining to ridding ourselves of the ego & anything that focuses on oneness for instance to what I write about a lot of the times which can pertain to the opposite. So does this make one right or wrong or less spiritual over the other? No of course not because the souls who have chosen to live a life of oneness in realities like this one are here to spread oneness, love & harmony for a good reason usually. Take a look at religion for an example of spreading this oneness around; it has always tried to bring us all together as one to think & be as one however the problem they have had is to do with the ego. The people at the top no longer see themselves as one with all others, this has always been the problem with religion in spreading oneness & of course because of this they are non-accepting of any other way of spreading this oneness about.

Now for souls like myself who feel realities like this one is the big WOW, what are we here for? If we all asked ourselves that question before we chose to live in such realities what would be your answer? To experience everything human emotions have to offer which is all ego related & emotionally driven. So is this saying human emotions are of the ego? Very much so but not all emotion are negative like not all egos are negative, some are constructive & some are destructive depending in what ego tendencies we want to play out.

This comes down to souls who want to just play out negative ego tendencies, which by the way I’m not one of them. What is there path or reasoning? Because realities like this one is the big WOW to them at the soul level they use every way they can possibly think of to avoid becoming at one & in harmony, living in realties like this one is the big WOW to them, it is that simple however the problem with this is they also dictate what our reality is going to be like by using the ego which is a very powerful tool to use at the human level which creates realities like we have now & this is where souls who are more into oneness & harmony come into it.  Even people like myself who are into all accepting & are more into the positive ego tendencies can change realties like this one if desired.  It comes down to souls like myself appreciating & even accepting at times the worse of what the negative ego can produce because we realise it’s value.
Posted by Mathew Naismith at 10:20 No comments: