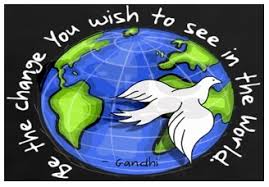 How many people are at present sitting within their own peace? In a lot of cases to do this takes one to ignore the insurmountable negatives in our present reality. In this case, peace didn't come at a price for the people finding peace in this way but it does for the people suffering from these ignored negatives.

You know why materialist influence is influencing and changing the world, and not for the better for all? Materialists actually treat humans as a collective consciousness; the materialist journey is indeed collective. No one's negative or positive is ignored for the sake of their material wealth and power, in fact this is why they are so wealthy, powerful and influential upon the rest of the world.

Many people of westernised spirituality often think, "My journey or path is separate to everybody else's journey or path", when in all honesty it's not, " so I have no right to influence another person's journey" I don't just have a right to try to influence the people who listen to me; I have a responsibility to the collective consciousness to do so. However, unlike materialists, this kind of influence is not forced upon people, it is simply there when needed. Yes, become noticed but in the absence of force and control, for example, multinationals who are obviously forcing their own journey onto the world, onto the collective consciousness.

Think on this, did Gandhi sit within he's own peace and do nothing to influence the world? He instead enacted on being the change he wished to see upon the world!!

Posted by Mathew Naismith at 08:57 No comments:

What a horrendous task, even thinking about creating world peace seems futile as the task to accomplish this seems so horrendous. Only to the ego in control, truly.

I have often expressed lately about how we should avoid abusing energy, not just in regards to our natural resources but energy as a whole, this includes the way we use and abuse ideologies and isms.

The ideology or ism may present itself, but may never be pushed on people. Imagine pushing Hinduism, Taoism or Buddhism onto other people, as soon as you do this, you lose the meaning and the substance of that ideology or ism. The ideology or ism may present itself to you but you must approach the ideology or ism, not it approach you, anything else is simply abuse of this energy. How is materialism or certain kinds of Christianity or Islam or even certain kind of new age spirituality used? They are often used in approaching you, not you approaching them, of course not all of Christianity, Islam or new age spirituality is used in this manner.

Think on this, when an ideology or ism is forced upon people, what occurs? Often chaos and destruction, anything but peace, now imagine when ideologies and isms are not pushed onto people. Hard to recall in the West isn't it? Of course ideologies and isms like Hinduism, Taoism or Buddhism are often only presented to be approached; they don't approach you if used properly as this is the way they are structured. Once these ideologies and isms are used incorrectly, in other words abused, they are no longer truly of what they are supposed to represent.

I was recently active in a world peace group. One of the discussions was about consciousness so I mentioned the following. "Some scientists actually surmise that a far more advanced and aware consciousness might have created this universe, seen as scientists are today able to create mini-universes. They also think it's possible to create a self-aware consciousness and biological matter within a human created universe.
Also, there are scientists that believe and hypothesize that a form of consciousness exists within everything. Taking this into consideration as well, it is obvious that any universe created by a consciousness is of the consciousness that created it. This of course gives credence to the perception and belief of a creative source (God) of all things."
One of the group members, of a world peace group by the way, took obvious offence to me relating god to the creations of the universe. They demanded evidence and even proof to my claims above. As they obviously didn't know, claims don't need supporting evidence to be a claim. Even after presenting evidence and even two lots of supporting evidence that claims don't have to be supported by evidence, they continued over and over again with their demand.
You see this particular person follows an ideological doctrine that's not supposed to be interested in accepting or rejecting any claims that gods exist or do not exist. However, he literally used this ideology to the extent of strictly forbidding the acceptance of this universe in anyway being attributed to a God. He in fact used and abused his own ideological doctrines to the extent of rejecting any claims of the existence of Gods of any kind. I even ended up supporting some of my claims using science, this was instantly rejected of course which goes against his own doctrines of his ideology. After numerous claims by him, he presented evidence but evidence from a philosophy source, not from a credible scientific source that he consistently demanded from me. This person was taking more of an atheist stance than an apatheist stance.
Sadly, this person was supported by other members of this group, even while he was obviously abusing me and his ideology. Lying, deceiving and manipulation to protect your biases are indeed of abuse. To force your own ideological doctrines onto someone else over and over again is also of abuse. If he's ideology had any substances to it, all he had to do is present it to me but this was clearly not the case.
If you follow an ideology or ism correctly, the substance of the ideology or ism should speak for itself. All you should need to do is present it; anything else is going to lead anywhere else but to peace. If used incorrectly, ideologies and isms will create biases. Biases create lies, deception and manipulation because of the way we abuse energy, such as ideologies and isms. Try lying, deceiving and manipulating in the absence of biases, of course the more extreme our bias is, the more we will lie, deceive and manipulate, in other words abuse energy.
Try to think of everything as pure energy, no biases to what kind of energy, just energy without labels or tags. Once you actually experience a state of only perceiving everything as simply being energy, you will have a different outlook to life for the rest of your life. Within this state, you can actually observe the difference to energy being abused and energy not being abused. Energy being abused looks all chaotic and distorted. When energy isn't being abused, it looks sedate and proportional. Abusing the ideologies and isms the way we are doing, will of course lead to a chaotic distorted reality.
I am an advocate against abusing energy; this includes abusing ideologies and isms. I am not an advocate against all ideologies and isms but I don't, in a bias way, follow any ideology or ism. Yes, I often use a number of concepts and principles of various ideologies and isms, but I try not to use them in an abusive way.  Abuse by the way also includes feeding energy off of each other. How many new age ideologies rely completely on continually feeding the ego in control? You have to express a lot of motion by feeding each others ego otherwise the momentum is lost. This often occurs. The controlling ego could gorge itself on all the energy in the universe, this still wouldn't be enough. If an ideology or ism has to keep approaching you to feed it, this is simply an indication of abuse of energy.
I am aware that some of this, if not all of this, is going to be hard to comprehend to anyone who can't perceive that everything is pure energy. If you are a Westerner or even an Easterner, research on panpsychism or even idealism. Most Eastern cultures have their own way of presenting what I stated here in their own way. I don't' myself consort to idealism.
World peace is simply obtained through desisting or stopping in the abuse of energy, it really is this simple.
https://qz.com/1184574/the-idea-that-everything-from-spoons-to-stones-are-conscious-is-gaining-academic-credibility/
http://globalpeaceproject.net/

Posted by Mathew Naismith at 10:02 No comments: