Before I start I would like to point out that I feel that all human advancements are due to awareness, the human brain is only as good as what it is programed by, the brain on its own without being programmed is thick. We tend to separate human awareness from spiritual awareness within this concept of understanding, where has all the oneness gone in this? It’s still there it’s just we have separated human & spiritual awareness into two different categories mainly because of human reasoning. Under the one umbrella of the universal consciousness all awareness pertains to the same thing, universal conscious awareness. This is saying there is only one universal consciousness so really there is only one point in where all this awareness is coming from & it’s not from our human brains.

The graph below basically showed the scientific advancements through the ages but on the right hand side of the graph I have added human awareness as human awareness pertains to all human advancements, I don’t like separating one from the other & categorising  them as something different. 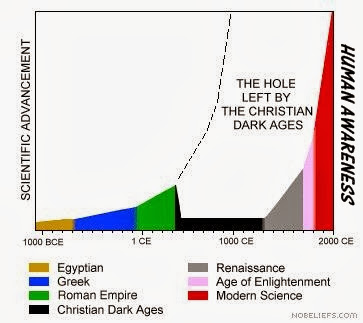 I would like to mention here that there has been a bit of controversy with the said graph above, the following link will hopefully clear this up if you have a problem with this graph.

Below I will also like to give a basic overview of our advancements through human history which will help us understand more about the advancements of human awareness over the ages than what the graph shows above. I’ve also included the medieval period, (dark ages), & the modern era as well to give a better outline in how fast we have developed in awareness over the last few hundred years

The above ages given here are by no means accurate as the links below will explain further if you are interested. A lot of the ages of awareness, as I like to call them, overlap a great deal depending in what part of the world we are talking about at any given time. For example the Roman age of awareness was different to India’s age of awareness as was the Americas at the same time period of human history; this is why the above ages only give an approximate valuation.  I did base the time periods more on European standards in general however even in Europe, at the same time period, there was different awareness process going on in different parts of Europe so one can’t track down precisely the exact time period in relation to human awareness overall.

This brings me back to why I wrote such a post in the first place. I look at all my lives I’ve lived in this reality as being one life not many different individual lives, I imaged the whole of human existence like this & all of a sudden I saw a huge surge of energy like a geyser shooting up & realised exactly what it was, the awareness of humans all of a sudden shooting right up. If we look at the graph above you should be able to see why I imaged a geyser representing human awareness however like all geysers they dissipate so does this mean our awareness will do likewise? Yes I think so but only in the way our awareness has grown over human history. We will find different ways other than through science’s &/or spiritualties to develop further in awareness I believe which will bring us into a different level or kind of awareness. I looked at this geyser of human awareness & saw immediately why so many soles have chosen to be here right now, it’s a once in a lifetime experience, a whole once in a lifetime experience not just one life time of human experience.  Look at life through your entire life of your sole & the world we are in looks & feels completely different. By doing this we then realise this geyser of human awareness is only a grand of sand on a beach or a spit in the ocean, it’s very fleeting in the overall time of things.
Posted by Mathew Naismith at 10:40 No comments: