Going Beyond the Inner Self Projection 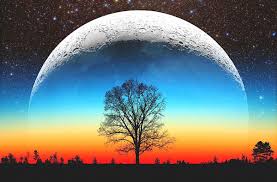 We most often perceive an inner and outer self, the inner self being our truer being and the outer self being our projected being. The truer being or self pertains to the self that is not influenced by external environments, where the outer self is primarily of and created by our external environment. For example, our five senses are primarily of our outer self thus giving us a projected image of our outer environment. Our inner self at no time is influenced by our five senses thus giving us a projected image of our inner environment. Of course if you are totally reliant on the five senses, nothing beyond the five senses can be comprehended therefore exist, this is quite understandable.

When we talk about the inner self, this is still projecting an inner environment as opposed to an outer environment through the five senses. Only through the five senses can the existence of an inner and outer environment or self exist, this is because in out, back forth, up down, are all based on our five senses. Our five senses were created by our physical environment and our physical environment is completely determined to what is in out, back forth, up down, in other words time based realities or existences. We, through our five senses, have projected an existence of day and night on a revolving planet going around the sun. We are completely conditioned to a reality of days and nights therefore time. Is not the projection of day and night the same as the inner and outer self? The projection being, one is inner so the other is outer. This is still based primarily of the conditioning of the five senses.

As in night and day, we are still projecting an image of an inner and outer self which is still primarily based on time therefore our five senses. The inner self exist only because the outer self exists as in day only exists because night exists. These are simply projections governed by our physical environment, no more. Isn't the perception of an inner self reliant on the existence of an outer self, in other words the inner self owes it's existence to the perception of an outer self, as in day and night. Within this, we are still primarily reliant on a physical existence and time to give us a projected image of an inner self. Now imagine going beyond this projection.

I have inserted a small article bellow where Sadhguru mentions the inner self. In my own words, the atman, the eternal self, refers to the real self beyond ego; this is what is known as the inner self, a self in the absence of ego. This egoless self is projected to being inner only because the present environment we are experiencing is ego. The ego is projected as being of the outer self and the self in the absence of ego is projected as being the inner self. What makes an inner and outer state in the absence of ego? Ego completely relies on time to exist, in other words motion like in out, back forth, up down, starting and ending points. In a state in the absence of ego, inner and outer selves simply don't exist, only in existences based on time and motion can inner and outer selves exist. What we project to be our eternal self is not governed by time because in this state there is no starting or ending points, it's simply an eternal state of being. Instead of stating an eternal state of being, we most often state inner self, how else is the ego self going to relate to the eternal self otherwise? This is exactly like nothing beyond the five senses can be comprehended therefore exist, this is unless we use what the five senses comprehends, in out, back forth, up down, starting and ending points.

I truly hope this is comprehensible as I am aware where this kind of awareness can lead.

Extract: People are always asking me, “Sadhguru, you are talking about so many subjects. Where do you get the time to read?” I say, “I don’t read.” What is there in front of me, I perceive it as it is and that is it. There is no need to carry the burden of knowledge on your head if your perception is keen enough. So perception can be raised to various levels through certain inner instruments. “Is it very difficult? Can I rise beyond my senses? Do I have to withdraw to a Himalayan cave to do this?”

Posted by Mathew Naismith at 09:52 No comments:

Email ThisBlogThis!Share to TwitterShare to FacebookShare to Pinterest
Labels: Ego, inner self, out self, projection
Older Posts Home
Subscribe to: Posts (Atom)