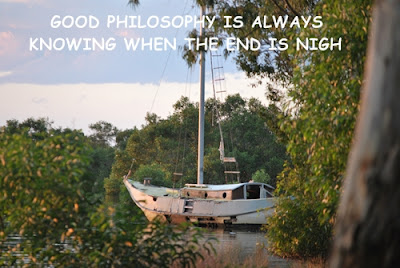 Recently I came across a beautiful person who’s seems to always quote beautiful philosophy about life from many people so I thought I would gracefully share her with you today.  “Within sharing we have opened up new doors that where once closed through selfish designs”….Love Mathew

http://www.linkedin.com/groupItem?view=&gid=1523037&item=266590953&type=member&commentID=158754712&trk=hb_ntf_COMMENTED_ON_GROUP_DISCUSSION_YOU_FOLLOWED#commentID_158754712
The good thing about philosophy is it doesn’t have to be of fact & logic but just of logical thought for in each philosophical view there is always logic. Faith believe it or not is also of logic to those who believe that faith is binding in bringing us together as one, what could be more logical than bringing us all together, “united we stand, divided we fall”.

I thought I would share a recent discussion that I & another person had with this lovely lady as follow:

Zen Message of the Week: "If you love life, don't waste time, for time is what life is made up of." ~Bruce Lee Submit your own Zen Message at: http://www.yingandyangliving.com/zen-message/

Sue Rumack • Is there a difference between placing your energies on make work, time filling activities as an avoidance technique AND quiet contemplation and reflection without an attached activity? Both could be seen as wasting time.

Moon H. Cho • None of those activities are wasting time if you are spiritually happy and growing during the process.

G'day Moon
So apt, time is indeed wasted without the love of life however some like to waste others peoples time therefore life as we have seen so often in human history. Grow strong grow wise!!

Moon H. Cho • Mathew... This is a good point. Unfortunately, others wasting your time is part and parcel of life, so I try to have it minimized and surrender to it when it inevitably happens.

Mathew Naismith • Yes, don't fight it, accept it for what it is & move on but some of us haven't got the wisdom to do this sadly enough.

By not accepting this &/or ignoring it is non-accepting which denotes conflict however if we have the wisdom to accept then move on we are for no longer in conflict & fear of it's return.

Many people denounce the ego & have a fear of being of the ego again but if you accept it first one never has a fear of such things again & the ego within this process of acceptance will never come again as it was, automatically, I believe.

I do love your philosophy Moon, it's beautiful.

Spiritual philosophical views pertain to life itself not to any factual views usually but all philosophy pertains to logical thinking, we tend to put logics in relation to fact only but that isn’t actually the case.  “For there to be wonder one must wonder about what there is to wonder about in the first place for without this wonderment no logical explanation can be found to entice one to wonder”….Love Mathew. We tend to pertain logics to fields like science & law for instance but for one to wonder about being of faith one would need to wonder in logical form for there to be such wonderment to entice one towards such fields. “We need not separate logic from faith for in this can there only be further separation”…..Love Mathew. Spirituality & faith isn’t about separation but togetherness & oneness, because we perceive logic as being of certain fields we separate this from our beliefs & faiths as it presumably seems like an opposing field of thought & action but in this thought alone are we practicing in separation & division.

Logic will get you from A to B. Imagination will take you everywhere.
Albert Einstein


Read more at http://www.brainyquote.com/quotes/keywords/logic.html#qM19RYj2cyg8PBT6.99
Posted by Mathew Naismith at 11:49 No comments: