What's Really Real - Not An Illusion?? 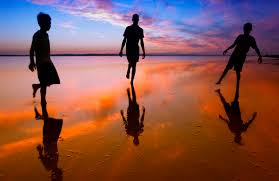 Human conscious is all about what is negative and positive, bad and good, real and an illusion, the question is, why does anything have to be one or the other, in the case of this post, real or an illusion?

Human Perception: In regards to human perception, there has to be a perception of one or the other. The reason for this lies within human consciousness's conditioning from birth as human consciousness is conditioned to night and day, hunger or fullness for example, so their of course has to be what is judged as an illusion or what's real. The strange thing is, what is often visually the most beautiful time of day? When the sun is either setting or rising. This time period however makes up only a few minutes of a 24 hour period therefore is often overshadowed by longer periods of light and dark, light and dark therefore becomes more predominant which in turn influences how we perceive.

Illusions: I still find it strange that so called well connected spiritually aware people, talk about oneness on one hand but on the other hand talk about what is real and what isn't. A consciousness in a true oneness state, has no perceptions of what is real and what is an illusion,  there is no perceptions of separation, anything other than this isn't a true sense of oneness. As soon as a consciousness has perceived an illusion, it has become apart of the illusion because it's now created an illusion by it's own human conditioned perceptions. I call this a black and white mentality.

Twilight States: What we seem to have negated here is the twilight between day and night, what is real and what is an illusion. As of the twilight hours of each day represents, a mix of day and night, what is real and an illusion is the same. As of twilight hours in a day, what is perceived as real or an illusion are intertwined which negates what is or isn't real. I am certainly an advocate in that our environment around us tells us who we truly are, this twilight is who we are even though within this particular reality of days and nights, days and nights are predominant. Just because a particular aspect of ourselves is predominate over other aspects of ourselves within a particular reality, doesn't make one aspect more real than another just because it's more predominate.

So often spiritually aware people will get into a oneness state and perceive that anything other than this oneness state is an illusion, this perception within itself tells us that this is not a true oneness state that is being experienced. A true oneness state has no perceptions/judgement of what is real and what isn't, there is no true separation but with the perceptions of illusions and even what is real. Yes that's correct, there is no perception of what is real either in a true oneness state, and in actuality, nothing is real as nothing is an illusion either for one needs the other to exist. This is what I call a twilight state of consciousness, neither one or the other. Because we are humanly conditioned from birth to perceive in a black and white mentality, this is how we perceive everything we become aware of, even oneness itself. Yes, amazingly enough, we even separate oneness from other realities and still judge it as oneness!!

As usual for me, this post expresses a strange perception which is difficult to comprehend, there is no question of what is real and what isn't real. This perception within itself to what is real or isn't, is the creation of illusions, as I have always stated, it's an illusion of an illusion created by the perceptions of an illusion and what is even real. I would suggest to my readers to perceive neither and all of the above, why does anything have to be anything, why can't it just be without this kind of perceiving?  Don't separate everything within a certain perception in accordance with a certain reality, it just is what it is within each reality, it's truly this simple.

Note: Please do not take what I have stated in this post a being gospel or of utter truth, it is what it is, but another perception that can often be, as usual in my case, incomprehensible to a lot of people and quite understandable too.
Posted by Mathew Naismith at 08:50 No comments: