Your Own Social Acceptance 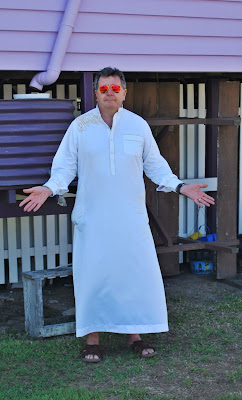 Personally, I think it's advisable to go along with your own social acceptance mentally and physically. The picture above shows me wearing a thawb/thobe, just because in my culture this kind of dress isn't usually accepted, this doesn't and shouldn't mean I shouldn't wear this kind of dress. It's advisable not to be limited to and by your own culture, all this creates is separative ideologies and concepts therefore realities based on separatism.

Yes, at no time cause distress or show disrespect in one's dress but one, in my mind, should always try to dress to one's own social acceptance. If you go to a black tie event, you wear a black tie. I wore this dress at a market that is one of the biggest markets in our area, at no time did I feel I was being disrespectful or giving people grief. Yes, it was obvious certain people of my own culture were unconfutable and non-accepting of my dress, however, it was they who were giving themselves grief through their limitations in accordance with their own culture, not me.

To atheists of extreme views, all else based on beliefs and faith is socially unacceptable, the same is with religious people of extreme views. In , you're not being a real man in certain social circles if you're not interested in football, go figure!! So the coalition forces are not at war with real men because they don't follow football and wear garments like thawb's and kaftans!!

Spiritually, one must sit, eat, think and be a certain way to be spiritual; at no time can one be conflictive, destructive or violent. Light naturally destroys dark, in a sense an unawareness is quite aggressively replaced by awareness. To the light, it may not seem aggressive but to the dark it couldn't be more aggressive. The Earth and the sun can be exceptionally violent and destructive; we can often find ourselves quite insecure and volatile in a natural world/reality. So because the Earth is violent and destructive therefore cause insecurities to ourselves, the Earth and the whole of the universe isn't spiritual!!

To a lot of spiritually aware, it is socially unacceptable for a spiritually aware person to be violent in any sense. Considering that certain spiritualists in lash out at people and that in certain Buddhist meditative practices violence is acted out, being limited to certain accepted non-violent spiritual social beliefs isn't true in accordance to nature. It's simply not natural to limit oneself to certain set boundaries within nature, for nature has no limitations. Considering that consciousness as a whole is infinite in nature, it's funny that we are still limiting ourselves to certain set social standards, usually in accordance with the culture we fixate ourselves to.

A lot of people experience their most enlightening times under duress!!

We might then think that we are being more spiritual the less physically expressive we are. To people like me, we are being more spiritual being expressive of physicality, not less spiritual. For starters, we are humbling ourselves and we are not allowing our egos to control how humbling we express ourselves physically. Secondly, to be expressive of everything physical, is to be aware of everything physical, in actuality, to be aware of separateness of physicality is to truly be spiritually aware. How truly aware and unlimited, infinite, are we when only aware of what we desire or perceive to only be spiritual?

In all, I simply could not imagine myself being limited physically and mentally to a certain cultural standard, in saying this, being limited to certain set standards like this is also apart of the spiritual journey. I was not accepted by certain people at the market in my dress, however, they too have a right not to be accepting therefore be expressive of their own culture in accordance with their own social acceptance.

It's not what we think, it's what we don't think that creates the problems we have in life!!
Posted by Mathew Naismith at 07:15 No comments: