The Consciousness of Light and it’s Shadows 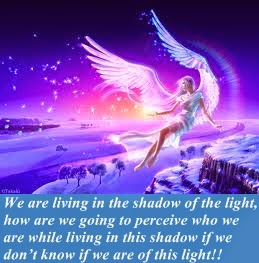 I came across an interesting thread recently titled, What is a Spiritual Solution by Deepak Chopra, M.D. It’s about our different stages of awareness we can find ourselves in and how there is always a spiritual solution to any problem that arise in our lives. I thought I would share my reply to this thread with you today….

Good thread, in my mind you have explained this quite well.

The question one would have to ask is, why get off such a roller coaster when it leads to one being of pure light? To begin with that's the wrong question, why wouldn't I get off when I like? Once you realise we are all pure light anyway, with a perception of a darker shadow, why wouldn't you get off, what would be the point in being and knowing who you already are?

Trying to perceive who we really are through shadows isn’t obviously going to give us a clear picture of ourselves, just glimpses of ourselves.  We need to be either patient for humans to collectively find it’s way through the shadows or realise we are already of that light and all we are doing is expressing the lights consciousness perception of itself. You could say we are serving God…..consciousness itself….. in it’s own perceptions of it’s own consciousness!!
Posted by Mathew Naismith at 09:53 No comments: