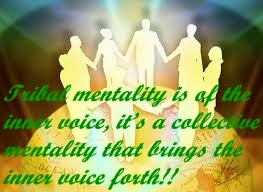 I should firstly point out what I mean about the inner voice for those who don’t quite get what I am talking about here. The inner voice to me is in relation to when the inner self speaks and speaks of inner wisdom and knowledge; it’s the sprit or what First Nation people in America refer to as the star in English.

East and West Mentalities: Does it matter if one is of eastern or western thinking when trying to become aware of this inner voice again?  To a point it does, when I talk about eastern and western thinking I’m not referring to a race of people or the colour of one’s skin, what I am referring to is the mentality of an ideology/philosophy.  It’s quite obvious western and eastern ideologies and philosophies are different, not within the content itself but within the ideologies of such content.  What I am saying is it’s the way we think about life itself that defines our mentality, for example, does western mentality take in consideration of the tribe of the people before themselves?  How many people within a town or city truly look at themselves as a collective, a tribe of people?  This is why western mentality is more about the self than the tribe, eastern mentality isn’t like this, the tribe comes first and only then is the individual taken into consideration.

Western mentality isn’t being just about the individual  but also about separateness however this kind of mentality seems to be slowly changing to a more tribe like mentality but it has a long way to go.  Sadly enough though, easterners seem to be taking on this western mentality, losing their own eastern mentality in the mean time for something more physically glamorous rather than spiritually glamorous.  What is happening?

Ego Controlled Mentality: It doesn’t matters what kind of mentality you take on or live your life by, we all have to contend with the ego and it’s controlling ways, this is a never ending battle that should always be fought otherwise the ego will take over completely.  Does tribal mentality have to contend with the controlling factors of the ego?  All the times but they are lucky because any individual who becomes egotistical will know the tribe comes first, western minded mentality lost this bond and it’s loyalty to the tribe long ago.  This allowed the ego to take even more control.

Eastern mentality has also suffered in the east, the Middle East and China are good examples of this, they are losing their fight against the controlling ego for the main reason I feel is because they have lost the importance of the tribe.  This has allowed the ego to fill this void left over from losing this tribe mentality (eastern mentality).  How can we fight the ego when all we are doing is living for ourselves and not the tribe?

Western mentality is also about positive thinking as opposed to negative thinking but how positive is this thinking when we are about ourselves and not the tribe?  How many positive people judge other people as being negative and ostracise them, is this really positive?  Of course not, does this happen with a tribe like mentality?  It can’t for the main reason it’s never about the individual but the tribe itself, the controlling ego just doesn’t play a part when the tribe itself comes first, there is no actual individuality for the ego to be able to gain control.

Western mentality gives us egotism which allows us to judge that I am positive, this takes judgement to come to this conclusion, I judge you negative therefore I must be positive.  The reason this doesn’t happen in a true tribal situation is there are no negatives and positives to judge each other by, it’s more neutral.

Middle Eastern Tribes: If we looked over at the Middle East at present, we will find tribes fighting it out, these people are putting their tribe first, in this case the tribes are reprehensive of different religions and factions of religious sects, what is so good about tribal mentality when it obviously creates conflicts?

At first glance these conflicts seem to be due to tribal mentality, to a point that is correct however why are these tribes truly warring with each other? Its’ to do with having different ideological principals to another tribe, what is anyone expressing when they become destructive over principles?  Egotistical, the more we conflict the more the ego takes control and of course the more destructive we become.  Eastern tribes have been warring for thousands of years, what again is so good about tribal mentality when it obviously creates conflicts?

Tribal Mentality: It’s not the tribe itself that I’m trying to portray as something more constructive but the constructiveness of tribal mentality itself, it’s the mentality of being a tribe that is constructive.  What man has done is allowed the ego to take control of these tribes not the tribal members taking control of the ego.   A tribe is formed by many different and varied people coming together as one, no one is exactly the same but the tribal mentality has brought them together.  What we don’t do as a species is look at the whole of mankind as a tribe with different and varied people coming together as one, we are still separate tribes like separate people within a single tribe warring because of our differences which are egoistically controlled.  In a tribe not controlled by ego and judgement, we don’t get this kind of conflict, yes there are conflicts but they are soon dealt with by other tribal members. 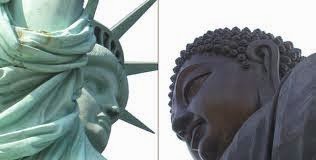 Wow, the contrasting difference between replies to my posts is astounding at times, the following replies to my post titled, Living from Inner Happiness, was astoundingly different and obviously took a different mentality to perceive.  I wish to say again, do not take anything I say as serious as I mostly write about my journey, you don’t have to agree with it nor should it seem threatening to you.


Mathew
sheila unger:  In my mind we should be all walking on water, you just don't get it do you. Don't emotionally judged me, all you are doing is proving my point that I have made in this post.

If it's all about me it's all about everybody else, who is being shallow here?  You absolutely have no idea what I am talking about here so you have judged me according to your emotions, thanks for proving my point sheila. ﻿


Minosowin
RIP Robin Williams.  Thank you for honoring him in addressing this issue in this way.  I am Native American/First Nation.  I've witnessed my people through extremely difficult situations, their lives exemplifying their very core being of the inner self.  The extreme difficulties were met with the same attitude as their extreme joys.  This, I know, is a gift to witness.  Those teachings were for me to learn, we are spirit. This unfortunately has been lost, many of our communities dealing with suicide at alarming rates. Since 2000, I have lost count in how many young people have committed suicide, I lost count at 20! The youngest was 12. The devastating negative impacts of colonialism and assimilation plan to be someone we are not has take its toll.
I know the answer lies in sharing the message of who we are to the young people.  In my language the word for 'star' is the same word for 'spirit' I asked an elder one day why that was.  The elder answered, "it is to remind you that we are all connected, we are one."  When one truly knows they are one they will not be moved by outside sources, something I witnessed as a child with those elders who lived their lives before me.  It is why we are still here, it is why we have not been annihilated.  Thank you once again for your tenderness.  Aho.﻿


Mathew
+Minosowin Iskwew That is sad Minosowin that so many younger people are forfeiting their lives.
The western style mentality is taking it's toll however this mentality I feel is also in it's death-rows, many western people are taking on eastern mentality or the mentality of our star.
Europeans went to America and judged it's inhabitants through their emotions as they have forgotten how to feel instinctively without judgmental emotions.
The western mentality is wholly built around emotions which are very judgmental and we wonder why we live in such a chaotic existence!!
Take this post for example, there was one person who downed what I said, they obviously judged me through their emotions not their instinctive feelings from their star.


Actually Minosowin I'm going to write our exchange up in a post, people need to know I feel.
Posted by Mathew Naismith at 15:28 No comments: