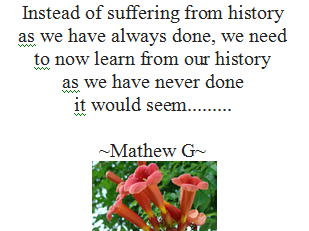 By all means blame the and its citizens for the world's degradation, a state where the quality of being human is being degraded. I can only put this in an Aussie way, an Australian way, "Criky, what a croc, ya av got to be drongos to believe this tripe."

The interpretation of this is as follow, "I am bewildered, what a load of lies, you have got to be idiots to believe in this kind of unsubstantiated claims.

It is certainly misleading (tripe) for a very good reason, our own degradation is a collective issue, not an individual nation's issue. Yes, nations like the are certainly not helping, like and for example, but the is not the cause of the degradation in the world at present. Yes, leaders in a capitalist system that has gone troppo, gone crazy with greed, but not the cause of the greed that is leading to so much degradation. Remember, was a mighty empire once that a lot of the wealth within its kingdom ended up in . The consensus is, if didn't do this, another nation certainly would have.

I recently watched a Jewish multinational being interviewed who witnessed first hand the holocaust. Basically stating, if he didn't use and abuse the system and its people to gain wealth and power, someone else would have. These people simply don't want to be in that situation again, when the entire people of a nation are being subjected to so much abuse and degradation themselves. Even when it was obvious to a lot of notions of the world that this was going to occur, they sat back and did nothing. Of course this wasn't the only time in human history that the Jews were subjected to so much abuse and degradation as a notion of people.

Think of it this way, how many abused children growing up as adults become abusive themselves? Now be honest in the absence of bias, how similar is the nation of Jews, not just , reflects the same tendencies as an abused child?

"Studies also now indicate that about one-third of people who are abused in childhood will become abusers themselves. This is a lower percentage than many experts had expected, but obviously poses a major social challenge."

One third equals 33.333…%. So you could say that 33.333…% of Jewish people in the world could well be abusers themselves. That is a huge percent but think on this, how influential is this 33.333…% on the rest of the Jewish nation around the world? When abuse like this is actually allowed to go unheeded and actually supported by nations like , and the , no wonder the quality of being human is being so degraded at present. Of course human's are not the only one's being degraded, the environment as a whole is certainly on the receiving end of this degradation. This kind of international abuse is certainly influencing the rest of the world that sat back and allowed a notion of people to be abused in this way!!

It really seems that more than 33.333…% of the nations in the world that have been abused by other nations become abusers themselves!!

So what is the answer? As I have been stating for a while now, we need to as nations and of people of the nations stop suffering from our history, instead start learning from our history thus ridding ourselves of abuse all together.

Posted by Mathew Naismith at 09:32 No comments: