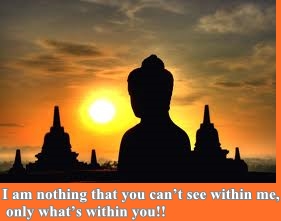 Sorry for my last post by the way, it wasn't well written, I had to make a number of changes to it to make it more legible. What I did notice from this is my readers still understood where I was coming from. I inserted this post on spiritual  forum, all I received was rebuttals concerning my grammatical errors, they were unable  to perceive beyond a wrong and right, black and white perception. You are beautiful people, you just don't perceive in a black and white, it's a big deal, trust me.

This post however is basically about the concepts and perceptions of unconditional acceptance which is what the following phrase is about," Acceptance of all leads to true spiritual awareness". Does this phrase mean one has to accept everything excluding not being non-accepting. as soon as we have excluded any kind of acceptance, we have conditions, this of course isn't unconditional.

At this point this might not make any sense but bare with me, most western thinkers are unable to comprehend this, "you need to also be accepting of not being accepting as well". Within this, there are no conditions, this can be a daunting  perception to comprehend but well worth understanding in my view, it's unconditional after all!!

The following will probably give you a better idea of what I am talking about here. My perceptions and concepts are not well accepted on this site, I've received a lot of flak but it's all been well worth it.

KINGCAPITAL:OH and goofy1 Not to be a smart ass and say you dont know any of this but just mentioning this just in case anyone reads this. I really feel like paying attention to nonsense like that is only detrimental to yourself! Like do you ever feel like you are influenced by your surroundings? Just how people say "you are who you hang out with" well i think when you pay attention to nonsense you become nonesense just as you said when you pay them mind you only become agitated and drained due to it

The surroundings you put yourself in you become, you basically become a reflection of your surroundings, the problem with this is I don't see this as being unworthy, however, it can be destructive. Pz and cheeneka are only hurting themselves, they think their hurting me but there not.

This is going to be hard to explain, I deliberately put myself into these situations, I'm a very fortunate person because I am able to be wise and unwise within my expressions, neither expression is above the other even though the ego will say otherwise. It is obvious pz and cheeneka  see me as unworthy but I don't see them as unworthy, they of course will dispute this but the replies I have received from them categorically state otherwise.

Even though I have put myself within their environment, I have not stooped to the destructive levels they have; deceiving, lying, stating people are full of BS and plainly wrong, call people names, continually chase people down to bully them and so on. They haven't upset me as such, I'm just totally bewildered in that people act like this even on a spiritual site.

My biggest problem is I accept people like this and I also accept myself expressing similar expressions than them, this is until it gets too destructive for me, at this point I ban them, this of course doesn't work because they chased me down but all this proved is my point. Pz on a few occasions has non-sequentially bagged my perceptions and concepts but in the next reply, he proved my points in the way he expressed himself!!

I don't think either of them realise how often they themselves have proved my points in what they bagged me for within their replies.

The question is, do I take unconditional acceptance too far? Most western spiritually aware people say yes, however,  most eastern spiritually aware people say no, as long as you don't fixated yourself to their obvious destructive ways. How often do eastern spiritually aware people humble themselves? It is humbling to be in a poor environment, it is also humbling to be in a rich environment, this is unconditional acceptance that I get bagged for so often from westerners, I understand their stance but they have no intention of understanding my stance and these are the same exact people that want a better reality to exist in, it's just not going to occur with this kind of mentality, their deluding themselves but if that is the way of the wind, so be it.

By the way, you are not a smart ass, you are actually being quite compassionate and understanding.

Forums are a good place to learn, they are not always complimentary but they are well worth the trouble if you can accept other people not accepting you and your perceptions and concepts.

On forums, I allow myself to become the environment it's projecting towards me, this at times can mean that I display a simular action as other people on these forums, the trick here is to accept this within yourself  without becoming too destructive within your expressions.