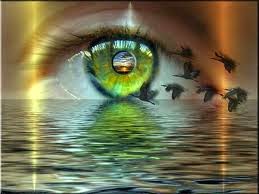 I had a good internet friend of mine bring forth some interesting queries and questions in relation to my last post, I thought I would share them with you with my reply and follow up response.

Mathew, thanks for such a great post -  profound and thought provoking . So many things have popped into my head! I find the idea of going with the flow appealing  as a way of continually evolving without reacting to the friction of everyday setbacks. I'm also wondering if going with the flow can be compatible with manifesting desires . . and are reactions our teachers . . .? It would be nice to have that serenity though!﻿

Thanks Carolyn, any kind of awakening is certainly thought provoking.

Desires and manifesting are tricky, usually there reactions to a circumstance which in turn creates further reactions. Have you seen the movie the fifth element with Bruce Willis and Milla Jovovich. When this dark matter appeared, humans reacted to it and the more they reacted, the bigger the mass got, this was pure consciousness and this is how consciousness itself works.

When we see a threat to our serenity, what do we do? We react which causes the threat to expand even more, the trick is to not react, this is not easy to do.

We actually don't have to manifest or desire anything as it's already there, it's just we are unaware of this. Serenity has always been there, we are just unaware of this.

"Are reactions our teacher", a very good thought, yes but only if we are going to learn from them, otherwise they just become a continuous nightmare. An unenlightened consciousness can become entrapped within this nightmare but this can only happen if we are asleep, in other words not awakened (enlightened).

When we get to this stage of enlightenment, there is no chaos or serenity, only consciousness reacting with itself creating a light and dark, right and wrong, serenity and chaos. This can only happen when a consciousness is in an unenlightened state, asleep in other words.

We have come to the point now, is this unenlightened, asleep state, an illusion, is time and the species man an illusion? It is very easy to perceive so, our own dreams are not real when excluding OBE's and foretelling dreams, they are illusion dreamt up by our subconscious or are they?