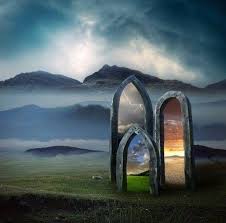 I’m sharing an interesting response I received from one of my posts, Is Spiritual Awareness About Feeling Good?, I found this response quite profound. The reason I titled this post a secret doorway is it’s like switching on a light to a dark room or opening up a door to a room already lit, awareness is very much like this and I found sigbjørn response quite enlightening. We are indeed awakening each other, it’s as if consciousness has decided to awaken itself to itself.

I’ve inserted sigbjørn response in italic and my response to him in bold.

Seeing your two somewhat diamentral opposite viewpoints on what consciousness is or what others deem it to be , as a very interesting and useful discussion !

Jumping in here not because I got some great answers, but to learn. And consciousness is one of the thing I mostly work on from a personal level. I’ve always really struggle with a clear definition and I am not sure there is one. Our perspective of consciousness is highly influenced by language, definitions by experts (psychology), and yes from the Secrets and others more service to self perspectives.

Must say I agree with your " all there is consciousness " theory, and want to put in that even the ego ( like in the Secret ) is absolute about consciousness. As I see it perhaps the most important. It is hard to climb the ladder without the first steps missing. And yes the ego barrier has to be broken at one point, when you realizes it only gives you a short lived " feel good " experience. And to break the barrier you have to open to a higher truth consciousness which is only based on love, but also love for yourself. You see that all is connected and by helping others with whatever it is , is helping yourself. This is also a form of ego, in my mind , but an ego that sees you and I as equal and as important as oneself. From here the healing can start. Don’t know if this makes sense!

Interesting my friend, you certainly show an open minded perspective, this is needed to perceive past perspectives influenced by the ego, in other words understanding beyond human fixated understandings.

Indeed, helping anything is of the ego, however, helping yourself or helping others to serve you is the ego in control, anything controlling is of barriers which stops us from being aware of anything beyond a controlling ego, this is very damaging to us so yes what you say here makes perfect sense to me.

Here I will give an examples of my experience with the complexity on consciousness, when I stated that the ego inside the barrier is perhaps the most important state in spirituality work. A " not so spiritual " individual, working from their service to self ego mind, is a person often showing others by example what consciousness / spiritual awareness is NOT about. Because it is important to know what’s not working. So when you standing up - you never want to crawl, ever again. I personal learned from competitions , - one of the most ego cantered activities on this planet, I believe. Going from I AM BEST mentality to I really hope for others to having success, felt right and propelled me into seeing higher truths based on love. What do you think. Am I a little off here maybe?

To be non-spiritual, in other words being about the self more than others even to the point of being egotistical, is spiritual aware building, but only if we awake to such awareness, many people become too fixated to this and never wake up, this is when the ego makes us ill in mind body and spirit.

Being non-spiritually expressive is still being in service to you and others as long as we become aware of how destructive ignorance can be. Competition can actually connect us to a consciousness beyond human perception, how many sports people find themselves in this zone once they focus on their own abilities or their own self, in this zone you are no longer competing with others once in this zone. How many of these people know nothing about the score instil the end?  It’s basically becoming one with the ball or the car for example, the zone is about becoming one with what you are doing.  To get into this zone however takes a lot of competitiveness and love of the game, it’s amazing how egotism can lead to such a connection, a spiritual experience of becoming one with yourself and something else, so yes it’s all a part of consciousness.

When I trained myself to be " IN THE FLOW " and I experienced that a lot, it was absolutely to connect to a vast energy field and a not definable consciousness. But It allowed me to perform at an " ego based winning mentality " , thereby confirming my earlier said statements, for me anyway.

So to define what spiritual awareness and consciousness is all about, is for me impossible. I totally agree in your main theory., the consciousness of all - and perhaps ever expanding, but firmly based on love and service to others.

Until we reach the oneness of all there is, and probably that’s not the end of it either. lol, we have to do our very best from the place we find our self . The real secrets and consciousness journey, will truly be exciting to experience.

Thank you for sharing your great reflections on this most important subject !

Thank you so much in sharing your experiences and thoughts with me
sigbjørn, I’m going to share this with others if you don’t mind.

The secret doorway: Is this oneness, or motionless timelessness we are trying to obtain, the ultimate in who we are, is this our truer self?  Again I would have to answer this question with a yes and no, this is due to there being no ultimate final state of our own existence, however, this oneness does depict the awareness of all we are. While in this oneness, we are aware of all of consciousness, not just parts of consciousness, this is why it’s of this oneness.