The Age of False Prophets 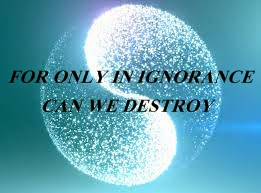 It was predicted before the age of the false prophets, that human consciousness would enter into a period of false prophecies, this doesn't just mean prophets will be false, it means that this time period will be of falsities period. The controlling ego will lust after anything that sparkles and glows, anything that tantalises the egos five senses, this includes lusting after love, especially in reaction to a reality void of awareness and wisdom.

The universe itself is a creation and every consciousness within this universe is created. Materialism is a  creation as is love, both can be highly destructive especially when expressed to an extreme or in retaliation. Some people have lusted after materialism, others have lusted after a form of love, if it tantalises the ego, it has to be good, of course we know how destructive materialism and love can be. Now, is there anything tantalising for the ego in being in balance, considering there are no extremes within a true balanced state? You take away love and hate, negative and positive, bad and good, demons and angels, what within this balance is tantalising to a controlling ego? There is no sparkles or fussy glow to balance but this also means there is no falsities within a true form of balance either.

The age of false prophets is all about tantalising  the controlling ego, if it sparkles and glows, it can't be false, or so the ego tries to make out no matter what. The ego doesn't want you to realise that all the sparkles and fussy glow is a creation and that a true sense of balance is what we truly are. What the ego wouldn't  want to know is that all we are is this  balance? A controlling ego will influence a consciousness to anything but of being of balance for there is nothing to tantalise the ego within this balance.

Creations = love and hate, negative and positive, bad and good, demons and angels + all of what is created

Balance = God/creative source + void of all creations within itself

However, we exist in a created reality, this means our consciousness is created and will within itself create more creations to what ever extreme. While existing within this created reality, we will of course be expressive of these creations no matter what they are. No consciousness within this kind of existence can be primarily expressive of a true form of balance, we are meant to be expressive of what is created. We of course have a choice in how extreme we express these creations, the age of false prophets however denote extremes expressions of these creations. Do we now keep expressing these creations to the extreme or do we simply express some kind of balance again? This really depends on what we really want to create, or more precisely, need to create for a more blissful existence.

A true sense of bliss within a balanced consciousness,  isn't something that is hard to obtain for we have always been of this balance, what we haven't always been is of these creations, in actuality, it's a lot harder to create than it is to just be. However, because we are controlled by a controlling ego, the illusion of separation from being balanced is extreme, it's this extreme that is making it hard for us to realise we are of this balance no matter what creations we are expressive of.

Yes, the age of false prophets is making it more difficult for our consciousness to become aware of how a controlling ego tricks us into what tantalises the ego, we are more than ever being tricked into even more extreme creation in reaction/retaliation to our present chaotic existence. You see, one will naturally create the other, a chaotic existence has naturally created an extreme opposite, this extreme opposite will again in turn create yet another extreme opposite until both extreme become that extreme, that they will cancel out each other, destroy each other. This is how anything created works unless it's brought back into balance. Of course extreme creations are supposed to destroy each other in the end but this can be simply avoided.

In a pass life in ancient Egypt, which was confirmed, a few of us tried to reason with the people of that time in the same way, you can avoid an upcoming catastrophe if you adhere to the laws of consciousness, an extreme will naturally create another extreme. The powers at be of course didn't listen to us and of course suffered big time when it didn't have to. We where separated from each other and banished to outlying areas of .

I said to my wife this morning, "At least I'm not being banished this time", my wife stated," Haven't you been banned from other sites that didn't like what you were stating." I have also recently been attacked by so called loving people once again, not much has changed for me since my life in ancient . You can lead a horse to water but you can't make it drink!! What is supposed to be will be but you do indeed have a choice, that is all I am saying.......Balance is indeed the key to bliss.
Posted by Mathew Naismith at 10:31 4 comments: