Shedding Our Cocoon by Becoming Wise and Aware 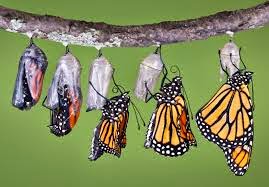 Boy, I know how to put the cat amongst the pigeons. This post was incited by a vision I had last night, it wasn’t the most pleasant visions to have but boy it was very aware building. It was about something some people would deem as negative but you couldn’t really have a more positive vison if you wanted too. This post is about removing ourselves from our cocoons, this allows us to become wise and aware of our whole self by shedding our fear of facing our demons on the collective level.

Most of us know how to face our own personal individual demons which are mainly based on the controlling factors of the ego; this vison however is about facing our collective demons on a collective scale.  To do this you can’t sit yourself in a deemed negative or positive cocoon, in other words being fearful of facing what we deem as the negatives and/or positives in our lives, sure it feels secure in our little cocoons but it’s not really. These cocoons we have built around ourselves only keep us ignorant to what the collective is going through. I should point out, a truly positive person will not see a negative in anything what so ever, it’s very much in line with unconditional love, it has no conditions or judgement.

The vision was of a demon devouring the flesh of others, the demon was represented of man devouring the flesh of others and even himself. This on the collective scale is represented of how man prays and lives upon other people’s misery and misfortune to feed his own ego driven appetite. I then got a vision of a sabre, sabres only have one purpose and that is to harm and kill others. Have you ever handled a sabre? Psychologically most people feel more powerful when handling a sabre; it represents power and control over other people’s lives, guns can also have the same effect that is why so many people love these weapons. The sabre in this case represents authority which is driven by power and control over others.

The point of visioning the sabre, straight after my vision of the demon, wasn’t to show me how powerful and controlling these people are but how these people have a need to feel powerful and controlling, the vision was showing me that these people with power over us have to have a safety blanket, so to speak, to make themselves feel all powerful. This safety blanket is the controlling factors of the ego, they need the ego to work in this way to feel secure and powerful even if that means devouring the flesh of others as depicted with the demon. These people to me were depicted as cannibals; these are the people who prey on other people from the smallest of criminal’s way up to the multinational level of criminal activity. In this case criminals are depicted as cannibals, people who prey off of other people to feed their own controlling ego.

When visioning this vision I was not one bit fearful nor did I deem these people as negative or positive, I was actually sympathetic to their own ignorance. The only way people can hurt and even kill others is when they are in ignorance; you have to be in ignorance to do such things.

This ignorance is represented by the type of cocoon we build around us either it be of a negative value or a positive value. The reason for such cocoons is to keep us safe while we grow into a butterfly but what is a cocoon keeping us ignorant too?  It’s keeping us ignorant to anything that is not of what our cocoon was built out of, either that be a negative value or a positive value. How many deemed positive people can fearlessly face the collective demons and how many deemed negative people can face being aware of their own ignorance? A true positive person can face up to anything because when they come across something more destructive and harmful, they don’t judge it as being bad or good, negative or positive for the main  reason they can’t possibly see a negative in anything.

These people who prey and feed off of other people are living in utter fear of anyone who isn’t living in a cocoon; once you come out of such cocoons you become much more aware, wise and fearless of these cannibals. This is why I didn’t feel fearful when visioning such visions, I actually laughed, how could these people still be so much in ignorance to the level of devouring each other’s flesh, as depicted in the vision. The only reason we are still devouring each other’s flesh is because of ignorance, because we keep building these cocoons out of fear, a fear of being aware of the deemed negatives and positives of the collective.  Once you become aware, there is truly nothing to be fearful of.

Soon after my visions the thought of China came to mind, this wasn’t by coincidence mainly because I was still in a visionary state of consciousness, how could a country that was of the concepts of solidarity, equality and oneness turn to utter cannibalism, the devouring of other people’s flesh and their own? Communism didn’t work and won’t work unless it follows these principles of true solidarity, equality and oneness and most importantly, desist in using the sabre.

People like me who are not fearful of any part of the collective are becoming more prevalent, we no longer see a bad or good, negative or positive to be fearful of, we see everything of being different levels of awareness and wisdom that is all.  We see people who are wholly in their deemed positive cocoons being fed off of while the negative people thrive on their devoured flesh. The only reason anyone would build such cocoons is of fear and it’s this fear we need to deal with. The only way to deal with this fear is through awareness of all of what the collective is, not what we want it to be.

Break open that cocoon because you truly have nothing to fear but the fear of becoming too aware and wise, now that would be a shame wouldn’t it? Yer right. I’m an Australian country boy; it’s wise to make allowances for me, yer right!!
Posted by Mathew Naismith at 10:08 No comments: