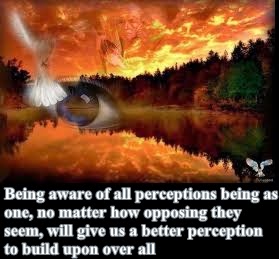 Hi Mathew. See this is what I mean by doublespeak. Now, please look at my question, it is genuine.

Duality by its very definition is opposing views. So when you say that its our perceptions of this that is the problem, I fail to understand what you are saying.

How else can one perceive opposing views! But in opposition?

Are you saying that we need to rewrite the definition of duality?

Thank you in advance for helping me to understand.

Insightful questions and I will my best to answer them however anything I say isn't gospel here, it's just a view.

From Wikipedia: [i]Dualism (from the Latin word duo meaning "two")[1] denotes a state of two parts. The term 'dualism' was originally coined to denote co-eternal binary opposition, a meaning that is preserved in metaphysical and philosophical duality discourse but has been diluted in other usages to indicate a system which contains two essential parts.[/i]

There is a mention of conflict further on in this link but alternatively it also mentions complement.  You could say the obvious negative and positive here is also making reference to a positive /negative ego because the ego can’t exist without dualism.

Dualism, going by this definition, doesn’t have to be conflictive but can also be complimenting as well. I find it funny how humans only perceive the negative and well before they will perceive a positive.  We have all done this…….

Yes I know there are people who have demonised duality but these are the same people that demonise anything they perceive in a black and white perception, we need to start listening to people who perceive in technicolour in my mind.

Another collation here is what I also not too recently wrote about, old and new mentality, which collate with black and white and technicolour perceiving.  Everything is indeed connected in some way and if it’s connected it’s really one source not what realities of duality make us perceive…….separation or what I also call fragmented consciousness.  However just because it’s fragmented doesn’t mean it’s negative or has to be negative in my mind, we need to start perceiving differently to build upon a better existence……

Posted by Mathew Naismith at 08:36 No comments: 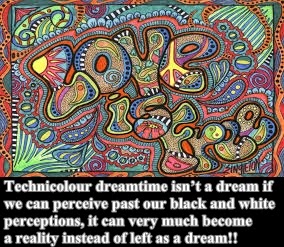